At the Intersection of I Need to Get Organized and I Need an Emergency Dice Kit . . .

A few days ago, upon seeing a few sets of dice sitting next to the bed, on my dresser, and on my bookcase, my wife commented that I needed to put an emergency dice kit in my car with whatever dice I might need for whatever game so I didn't have to keep picking up cheap dice when I forget my dice.

Now, in my defense, I don't forget my dice that often.  Usually it happens when we are playing a game that is out of the ordinary from our normal session, so I don't pack up what I normally pack up.  It also happens from time to time when I'm playing, but rushing out the door for one reason or another.

Given that my wife loves sales and loves hardware stores, she found some storage bins on clearance, and bought me three of them.  So I decided to actually make up an emergency dice kit, as well as assessing what I would need in a "normal" dice kit for the nights I play and the nights I GM. 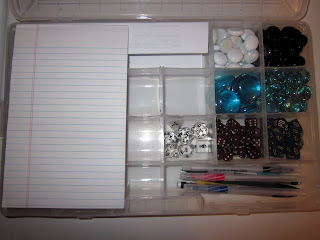 Up there is the aforementioned emergency dice kit.  Up in the top tray are folded up copies of my current PCs  (7th level Oracle and a Rank 3 Devastator Marine).  The counters I threw in because, hey, who knows when you will need counters to keep track of something.  I have three pens, three pencils, a notepad, a full set of polyhedrals, a bunch of extra d6s, and a full set of d10s.

The plan is to put these in the car and only touch the thing when I go up in level or rank or something significant happens to print out a secondary character sheet for the PC in question.  Even if I fall a little behind, I know there have been times when it would have been much better to have an old, one level lower version of a PC to use for game night than to not have your character at all. 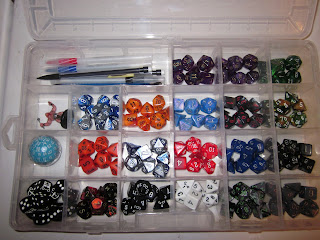 Now, up there is my regular player game night kit.  Yes, I have a d100 for my Deathwatch game.  I also have a whole lot of polyhedral sets in there.  While I will tell everyone that those are for other players that might have forgotten their dice for the evening, it's mainly so that if I get upset with a set of dice I can put them in time out and use their friends for a while.

I also have the mini for my Oracle in the Pathfinder game, pens and pencils, extra d6s and d10s, and some large size mini bases.  Why do I have those?  In case we end up needed something to mark a summoned creature, or to put underneath a medium mini that gets boosted in size for one reason or another. 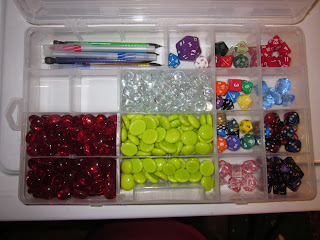 Up there is my GM night dice kit.  I carry my books and screen and everything in its own tub on game night, so this will be going inside that when I pack up.  I have pens, pencils, several d20s  (I'm only running DC Adventures/Mutants and Masterminds in a regular campaign right now).  I've got several sets of polyhedrals in there.  I have those mainly in case I run a Savage Worlds one shot.  I have the d10s in there so I can keep dreaming of the Rogue Trader game that doesn't exist yet.

The counters are wound markers for my Mutants and Masterminds game.  I'm using the alternate lethal wounds rules from the Gamemaster's Guide, so I have counters for hero points, non-lethal wounds, and lethal wounds.  All of those counters also come in handy, again, if I end up running a Savage Worlds one shot.  In fact, I was a little disappointed that I couldn't massage the removable slats enough to allow for a deck of playing cards to fit in the case.

And regarding my previous post about doing proper prep time . . . I sat down, looked for stats online for the people I needed, found most of what I needed, printed out pages, and wrote a nice, neat outline complete with logical hero point potential rewards, and an outline that I'm sure won't do near as much good as it could because the players will come up with a completely different wild tangent, but at least it will give me a solid jumping off point . . . ;)
Posted by Jared Rascher at 11:45 PM

Email ThisBlogThis!Share to TwitterShare to FacebookShare to Pinterest
Labels: Organization