I picked up Engine Publishing's Never Unprepared earlier this week, and read through it.  Which is funny, because I actually pushed back preparing for a game in order to read a book about preparing for a game more effectively.  You would think this might have been somewhat unproductive, but oddly, it wasn't.

I run into a problem.  I like to be prepared.  However, I almost do a worse job of prepping for a game if I have more time than I do if I have less time.  However, if I have too little time, no matter how perfect my ideas are, I stress out and do a slap dash job that I'm not happy with.  I do my best, most satisfying work when I don't have to have it done right now, but I don't seem to have infinite amounts of time to prepare.

I fully believe I'm ADD.  I've never been diagnosed and I don't think I've suffered for it, per se, but I know that if you give me too much time, my brain wanders all over the place.  If I have a full weekend with no other obligations to prep a game, I'll fail, because I have so many ideas and so many tangents that I go on that I'll halfway create about three or four sessions, but none of them playable for my next session. 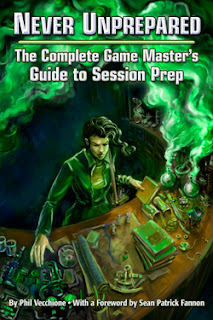 The best thing I got from this book was simply a model for breaking down the work that I'm doing when I am doing prep.  Between having some actual guidelines for steps to follow, and some rudimentary work on what days I should do those steps on in order to not have to do everything at the last minute, I actually found the two sessions I've prepped in the time since I've read the book to be less stressful.

There is lots of good, solid advice.  It's not 100% for everyone.  Some of it delves a bit too deeply into American Corporate Psychobabble  (and if anyone that is a fan, or even the writer himself, reads this, don't take this the wrong way, the vast majority of the book is wonderful, and there are people that such things appeal to and help.  Ever since my management days, such things always rub me the wrong way, and it's probably me, not them).

It does get a little repetitive, but then again, who is to say that that repetition didn't drive home some of the points better than I might have otherwise interpreted them?

I will say that I probably follow the exact steps within each phase a bit more loosely than presented in the book itself, but maybe that will change with time, or it's just an individual quirk.  Regardless of what the truth of the matter might be, the steps, and the discipline they force on you as a GM, are worth the time it takes to read through the book.
Posted by Jared Rascher at 6:30 PM