Over a week ago, I took over the reigns of the Edge of the Empire game I was in.  To start off we established our new status quo by figuring out who was still on the crew and who had left.  Two of the players had picked up new characters, and our previous GM had a new character to introduce.  Our old Wookiee, Gand, and the assassin droid hired on with the Hutt whose scavenger hunt we had participated in.

Max Damage, our "humans first" jack of all trades ran into an old friend of his, a ship builder who had run into a spot of trouble by having the wrong people help him finish one of his projects.  He had been given some corvette designs from Sienar Fleet Systems to deliver to one of the corporations in the CSA.  As in, Sienar hadn't made the plans public are started production on these designs, and somehow they might end up getting produced in the Corporate Sector before Sienar could do so. 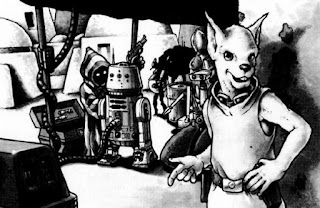 While Max's friend was joining he group, two other beings found the cargo hold of the party's ship.  A Force sensitive Squib trader and a Jawa started looking through what the ship had in it's hold.  The Squib was convinced that the ship was open, so it was fair game, and the Jawa . . . well, he's just kind of obsessed with doing illegal things.  The Squib pulled a blaster on the Jawa, and the Jawa disappeared into the cargo hold. 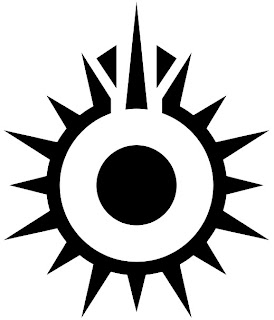 The party's "face," a Twi'lek that had the license on the ship, and that has ties to Black Sun, decided to pick up a job on the side, and after asking around a bit, ended up taking a job from one of the Hutt cartels to ship a load of stuffed Wookiee toys that certainly didn't have something like spice in them into Coruscant for distribution, presumably to children that liked stuffed wookiees. 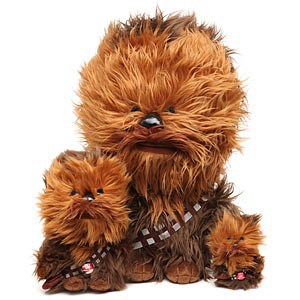 Upon finding out about the stowaways, the Twi'lek began to negotiate with the squib about his usefulness, and the squib demonstrated his unorthodox but useful trading skills by negotiating a trade license in the CSA by Holonet.  In the meantime, the Twi'lek decided that it would be best to get rid of any jawa pests by venting the cargo hold to the void, but the Jawa managed to scurry up to hide in the cockpit while the cargo hold was being vented.

The new shipwright on the crew turned out to be a excellent navigator and planned out an amazingly fast hyperspace route to Etti IV, the capital world of the Corporate Sector.  On the way to the planet, the group realized that the Jawa was still alive, and that he was surviving by doing things like eating their shoes.  Resigned, they stopped actively trying to kill him.

The shipwright managed to deliver his plans, accompanied by his friend Max, and the meeting seemed to go off without a hitch.  The Squib convinced he twi'lek to take on some legitimate cargo, and he managed to chat up a local mineral shipper to purchase a relatively small load of Outer Rim minerals that could turn a profit in the Core. 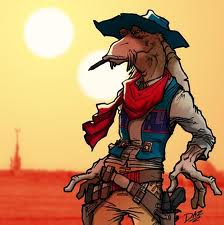 Unfortunately, the humans didn't make it back to the ship unmolested.  They spotted a figure trailing them, and rather than lose them, their mysterious stalker opened fire.  The notorious Gungan bounty hunter Deadeye Bodad opened fire on the pair.  The shipwright was badly injured by the Gungan's disruptor.  Max managed to shoot the Gungan in one arm, and he had to switch firing hands.  The fire fight continued, until, out of the crowd, without warning, the Jawa popped up, blew off the Gungan's other arm, then dove back into the crowd.  Max finished off the Gungan, and the Espos, local law enforcement, collected the body and everything at the crime scene.  The Jawa lifted a credit stick from one of he Espos, and the Squib, while hearing about the dust up on his com link, felt as if the Force didn't want him to leave the ship while it was being loaded. 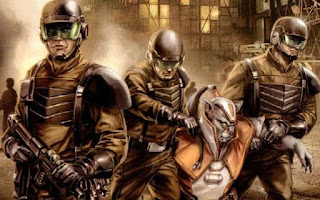 Between the Squib and Max, the group managed to convince the Espos not to hold them for questioning, and the group headed to Coruscant.  The trip was uneventful, and the Squib managed to turn a tidy profit on his cargo.  The Max and the Jawa delivered the Wookiee toys and negotiated a better price than the Hutt had set, and the Jawa pocketed a few extra credit sticks, since he can't help it.

We left the crew with the Twi'lek having a meeting with his Black Sun bosses while at the center of galactic intrigue.

Currently we've got a human jack of all trades in Max, another human shipwright, a Force sensitive Squib trader, a Jawa all around criminal, a Twi'lek politico, our Trandoshan gunman, and of course Prawn, our Rodian pilot and slicer.  Our Rodian and Trandoshan players couldn't make the session, and our Twi'lek had to leave early, causing us to wrap up a bit earlier than I might have otherwise.

The narrative dice for this game are really starting to grow on me.  In other games if you roll a number that's a lot over your target, sometimes you get the idea that you did something really well.  However, having the extra successes or setbacks right in the roll does kind of encourage you to add some details.  I like that there isn't a set response for every situation, but that there are lots of examples of how positives or negatives could effect success or failure.

Speaking of dice, the Squib was actually going to throw himself, using the Force, into the fight with the bounty hunter, but the Force dice kept keeping him from rolling high enough to do this.  I liked that this got interpreted that the Force was telling the Squib that he shouldn't leave the ship.

Where Did You Get a Squib and a Jawa? 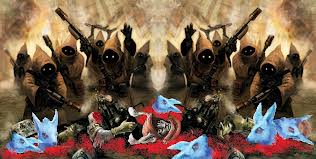 For fun I allowed some options from this site. Lots of fun toys to play with until Fantasy Flight starts to introduce their own expansions, which, if the 40K books are any indication, have to be in the works as well as the core book.
Posted by Jared Rascher at 1:32 PM

Email ThisBlogThis!Share to TwitterShare to FacebookShare to Pinterest
Labels: Games in Review, Star Wars Edge of the Empire