Thus begins the accounting of the second and longest day of the Winter War.  Heed well my words and . . . oh, nevermind, here's what went down the second day of Winter War for me this year. 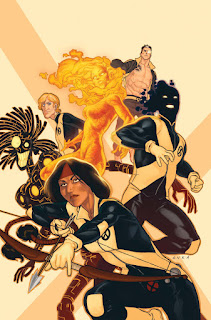 Saturday morning started off well, with my first session once again being held in one of the awesome conference rooms.  Once again I showed up early enough to get out all of the cheat sheets, dice trays, and various and sundry "table dressing" that I had set up for the session.

I'm not as sure about how many people in this session had played before or not.  I think we still had a majority that had not played the system before, but I think we had a couple that had played, and a few that had read the books before.

We also had almost a whole table that was familiar with the New Mutants as characters, so there was less of a familiarity issue than the Young Avengers presented.

One of the things I liked about this session is that the players really wanted to describe what they were doing in terms of surprising the enemy or ambushing them, but even the people that were unfamiliar with the game system seemed to pick up on how to do things fairly quickly. 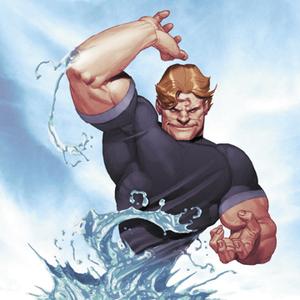 I also liked that the narrative and the game rules made it easy to figure out how to play characters and make them "feel" right.  For example, Hydro Man continually had a "burried in rubble" complication thrown on him, so I was spending a lot of my time running Hydro Man removing complications by reforming from the rubble.

The nicest thing about this session was probably the couple that told me that they were glad they had signed up for another session that I was running that weekend.

Young Avengers Redux--Chaos in the Middle of the Day

My next two sessions weren't in the conference rooms, and while I love those rooms, I know you can't expect to run the whole convention in them.  I've run games in the large room used mainly for the Saturday auction before, as well as another room with multiple tables, and had a really good time and a generally positive result. 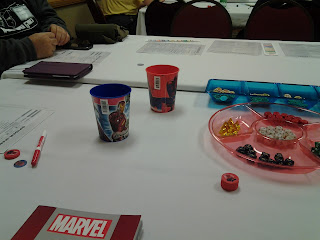 It was over a half hour into the timeslot when we got going.  It might have even been closer to 45 minutes once all was said and done.  The tables were thrown together rather quickly to get things going, so we hardly had any room to get seated, and were so close to another RPG table and a board game table that it was very hard to hear one another.

Let me preface all of this by saying that Winter War is great.  The people that organize and run it do an amazing job, and it's a lot of fun.  However, the chaos of that afternoon event really makes me think about not running anything in the afternoon slot after the auction, because I don't want to provide a substandard experience for my players.

We had a slot open, and someone came in even later than we started.  He had no experience with the game before, and was a bit lost.  Unlike the previous sessions, it was a lot harder to stop and explain how the game worked and to answer his questions due to the proximity of the other game tables with the hasty set up.

All of that having been said, four of the players had been in sessions already that weekend, which definitely helped.  The couple from the other session was back for this one, and seemed to enjoy themselves, and discussed buying one of the books, likely the hardcover of Civil War, so that they could play after the convention. 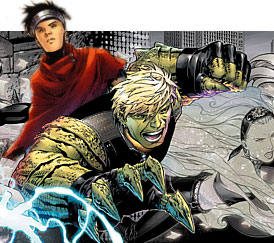 My two regulars from my Thursday night games, the two playing Cyclops and Wolverine the previous night, took Wiccan and Hulkling this time around.  That was some serious night and day roleplaying, and it was great.

All in all, despite the noise and the late start, most of the players seemed to have a good time, but I feel bad about our newbie that likely left not knowing what he had just sat through.

Saturday night we were also in the auction room, but this time my experience was much more like previous times I had been scheduled to use the room.  I arrived in the room early with some of my regulars, and we moved the RPG tables further apart, and moved our table back towards the wall a bit  more, and not only did everyone have room to move and get to their seats, the extra few feet we created by setting up more carefully made it a lot easier to hear one another. 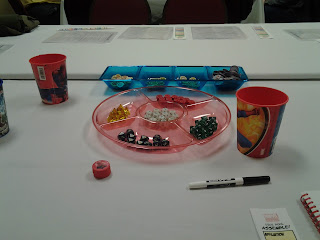 This session was the first half of the Breakout event from the Basic Game, and I offered the players the choice of eight characters that had affiliations with the New Avengers.  We ended up with Captain America, Spider-Man, Spider-Woman, Luke Cage, and Iron Man.

By this time, we only had one player that wasn't familiar with the game system.  They picked up on the game system pretty quickly, and also really keyed into the Milestones that Luke Cage had.  For the more experienced players, I was giving them the option of activating their limits a bit more, as Cap lost his shield and Spidey ran out of web fluid. 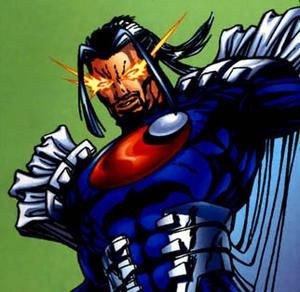 I also got to run one of my favorite villains from the Breakout event again--Graviton.  Running Graviton against the team reminds me of why I really like Marvel Heroic and why it hits the superheroic RPG chord better for me than other systems.  Even before Graviton got his turn, I was burning the Doom Pool left and right to inflict effect dice on his successful reactions to attacks.  I had most of the Avengers injured or complicated, and only took one turn before the team defeated him, but it still felt like an epic fight and one worthy of the comics, because of all of the options I had as the Watcher.

Saturday ended on a high note, and I had a nice, warm, fuzzy Watcher glow leaving the convention center that night.
Posted by Jared Rascher at 8:10 PM