I recapped what stuck with me from Never Unprepared because I wanted to point out why I jumped onto Odyssey as soon as the PDF became available.  I really like discussions of the nuts and bolts of running a game, and Never Unprepared was enjoyable and useful enough that I wanted more discussion in that vein.

It took me a bit longer to read through Odyssey that I had originally intended.  My first thought was that I would get it, load it up on the old tablet, and burn through it as quickly as I could so I could start yakking about it.  The reality of work, playing in an Only War campaign and "managing"  (to get used to the term from Odyssey) a Marvel Heroic campaign and a Dungeon Crawl Classics game, undermined my ability to "burn through" the book quickly.  But it was worth the time it took to finish up. 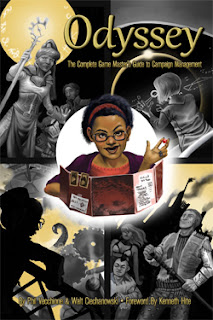 While Never Unprepared was about the prep work that you do to specifically lay the groundwork for running the next session of your game, Odyssey is about the work you put into the campaign as a whole.  Some of the big highlighted sections of the book are on starting a campaign, managing a campaign, and ending a campaign.

There is some really great stuff in this section.  A lot of it I tend to do already, but not because I'm a genius.  I've been gaming for around 30 years, and some of these lessons have only fairly recently worked their way into my skull. Even at that, seeing some of the checklist items that you should know up front when you are getting ready to start a campaign is a good thing.

Key things in this section?  Getting player buy in, setting your overall rules for how you handle things, and sticking to them, and making sure you know what kind of campaign you want to run, from tone, to setting, to rules, to length.

In some aspects, this is probably the part of the book that overlaps the most with other GM advice type articles and books that I have read, but it does push out into areas that those style essays don't always tackle.

In the People Management heading of this section, there is a very interesting discussion of problem players.  For years we've seem player types broken up into the various types of archetypes you might see at the game table and what motivates them, but this section looks at this from a separate angle, categorizing potential problem players and what they bring to the table.

What is also good about this section is that despite talking about problem players, the emphasis isn't on that the problem players are wrong or bad, but how you can manage what they bring to the table to bring everything back around to a good campaign.  Plus, any of us that have been on either side of the screen should probably spend a few minutes thinking about which of the problem player archetypes we've fit into when we've been on the side of the screen without the charts.

Yeah, I needed to read this section, and I'm glad that it was in the book.  In the last few years of gaming, I've only really ended one campaign as intended, which was my DC Adventures game, which ended in a climatic battle against Darkseid after the heroes had already saved their corner of the Multiverse from the Time Trapper.

Other than that, I'd had to end two Pathfinder campaigns more or less mid stream because I just didn't have the time to keep working on them, a Hellfrost campaign that just wasn't working out and never really got off the ground, a Rogue Trader game that I just couldn't continue to make time for, even though it was going brilliantly, and most recently a Star Wars game that I took over from someone else that I was having a hard time creating larger story arcs for, especially in light of the fact that I let the experience level of the campaign skyrocket early on.

Every time I felt as if I had let down my players, and that I was a bad GM. Turns out I shouldn't have felt quite so bad, but I should have put a bit more effort into creating some form of closure, and this section of the book gives various ways to make that work.

I'd certainly recommend the book.  If you are fairly new to GMing games, there is invaluable advice in the book.  If you have been gaming for decades, you may have come up with some or most of what's in here, but I can almost assure you that you haven't come up with everything in this book, and that a lot of what you have learned you often notice in hindsight, rather than before it becomes a problem.