This morning/afternoon I ran a 5th Edition Dungeons and Dragons game for some friends online.  I wanted to try out the system as well as hang out with a friend I don't get to game with at the moment face to face.  Here are some observations about the game, based on me just running the one time and only reading through everything pretty much one time.  That's all important because I'm sure there are things I'm still missing and will be missing until I trip over how to actually do what I've been doing. 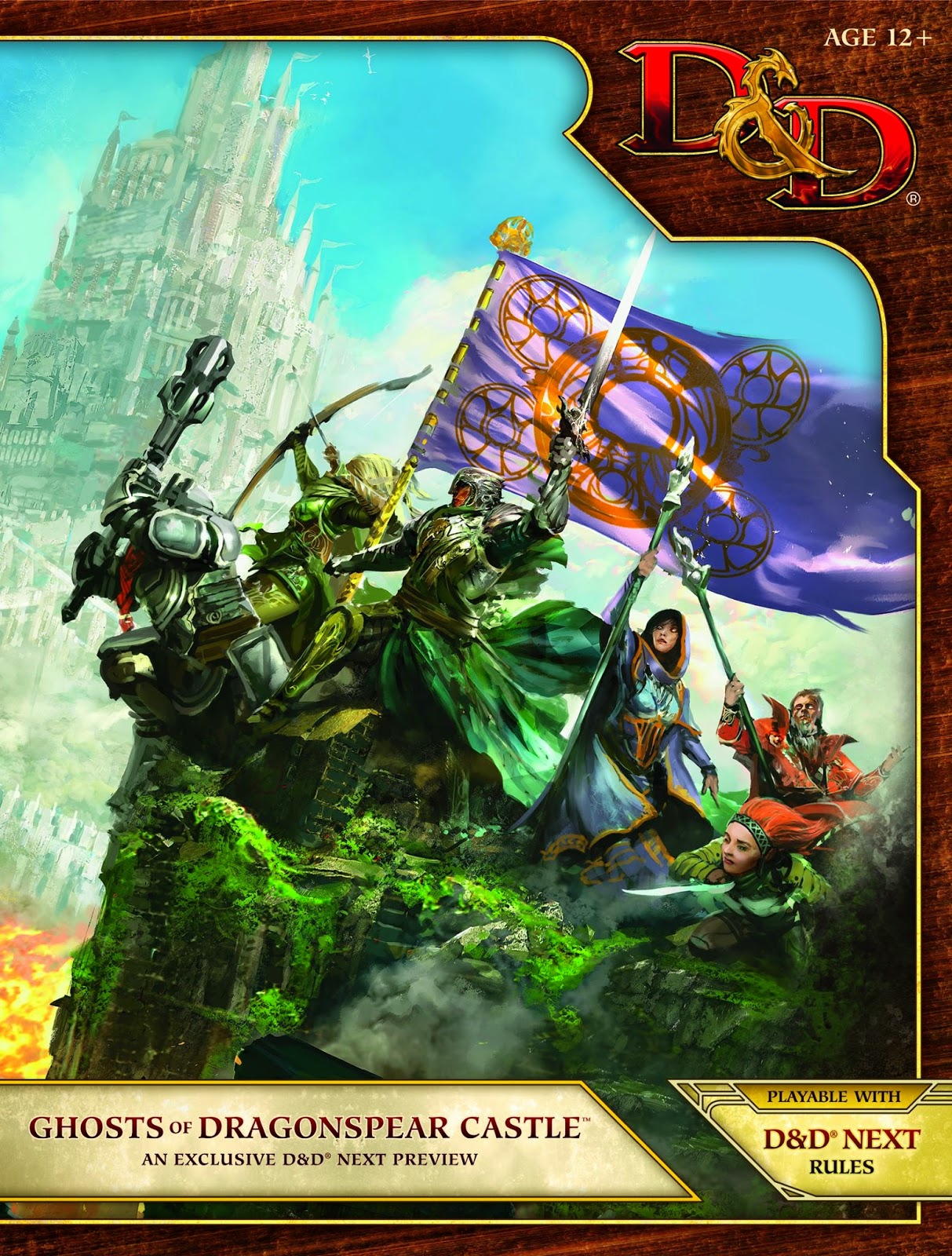 I ran Ghosts of Dragonspear Castle because I wanted to have the chance to actually run a longer, connected game if it came to that.  Given that it takes me forever to actually get people on track with the "real" adventure, since I like my side quests and roleplaying, this will probably never happen, but hey, I can dream.

The adventure (actually four linked adventures) looks fun, but not spectacular.  I threw in my own introductory information to hint at some later plot elements and set up why and how the party started working together, so most of my observations won't have a whole lot to do with the adventure proper, other than where the adventure took place, encounter charts, etc. 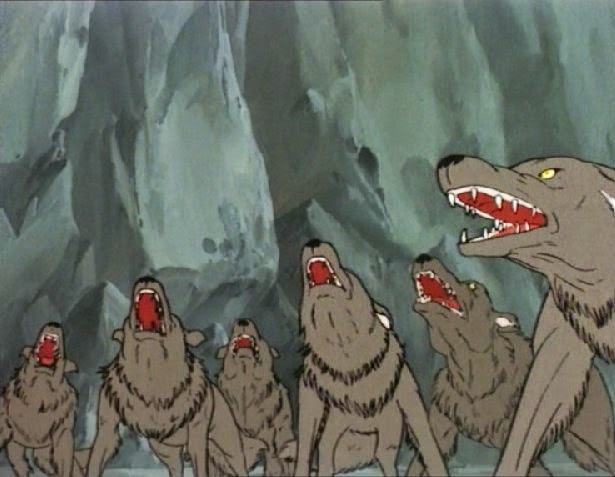 The adventure has you break up exploration into "exploration rounds," which means that you make all of the checks for finding things, wandering monsters, etc. at that interval.  In this instance, the "exploration rounds" were broken up into hours, since the PCs were searching for something fairly close to Daggerford.

After getting lost looking for the item they were hired to find, they encountered wolves.  This is where I learned that I should probably just look at things and use my old school instincts instead of trusting an encounter budget.

This article spells out how an encounter budget should work in 5th edition.  In WOTC's defense, they mention this is tentative, and that going with your gut is always a good thing.  Long story short, I aimed for a "challenging" encounter, and the article says to be careful using creatures whose Challenge Rating is higher than the party level.

Wolves are lower than the party level.  Before anybody old school points out that you should just throw the pack out there and let the bodies fall where they may, wolves are an odd encounter.  They are based on a real world thing, and people have varying ideas about how easily a party of four armed adventurers should be able to take on a pack of wolves.   I'll buy that 1st level PCs should know to run from giants or dragons, regardless of edition, but wolves . . . eh . . . that's trickier.

Wolves get advantage when attacking someone that an ally is also attacking.  If that ally is also a wolf, that wolf also gets advantage.  So that means if your wolves start to double up on adventurers, both of the wolves on that adventurer are much more likely to hit.  It looks very scary after a few rolls.

That said, my failure with the first random encounter taught me a few things.

1.  Look at the monster and really think about what will likely happen in a fight before trusting an encounter budget.  I should have noticed that the wolves were pretty vicious, but when rolling on the chart, I only noticed their Challenge Rating.

2.  I can definitely see how this bounded accuracy thing is going to work.  Wolves may be a little easier to hit as characters get higher level, but it doesn't seem like you are going to run into that situation that happened to me often in 3rd/3.5 with monsters that are only a few CR lower than the party never having a realistic chance to do any damage to the party.

That said, bounded accuracy also seems to indicate that maybe pushing 1st level characters into challenging encounters may be less advisable than it may have been previously.  Overall, I like it, and I'm interested to see how monsters like these work at higher levels, when they shouldn't be as outmoded as they would have been in other recent editions. 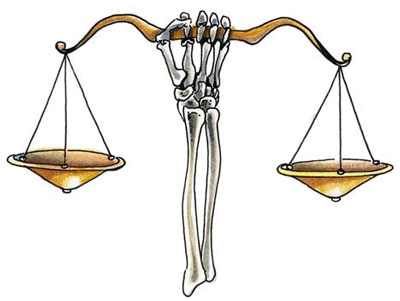 Yes, many of these were rolled.  I have read some concern over death saves still being in the game, because the PC making the roll isn't really doing anything exciting and it as a drag in 4th edition.  From what I saw today, I don't think it will be nearly as much of a drag in 5th edition, because so long as you aren't playing on a grid and micro-analyzing every 5 feet of movement, turns were going by pretty quickly.  But again, this was a 1st level party.

Plus it was kind of fun watching the dwarf suddenly pop back up, ready to go, when his player rolled a 20.

While it was true in 4th edition as well as 13th Age, I've only played in those games, not run them, and I think its interesting allowing players the choice to kill or not to kill a defeated opponent.  It's a relatively little thing, but it can turn what would be routine combat into a chance for the character to discuss what's going on in their head, and by extension, to roleplay their character a bit more.

In concept, I really liked the idea of Inspiration, but at the very beginning of the adventure, when things were going the much more old school route of "failed rolls lead to random encounters which lead to death," I was afraid that all of that neat background information wouldn't come into play.

Thankfully, once the PCs got to some more "story based" encounters, it was a lot easier to figure out situations where they had been directly acting on their backgrounds, and thus, where I should be awarding Inspiration.

Eventually we had dropped to two out of four players due to technical issues and other obligations, but the two remaining players both earned Inspiration based on their actions matching where their interests would lie. I was pretty happy with it overall, but If I run for a bigger group, I think I want to have a chart that clearly lays out all of the players background headers so I can keep them in mind and not forget a chance to properly reward them.

This is a fun mechanic.  Maybe I'll get bored with it, but it was a lot more fun to assign and to use than a simple bonus to a check.  There were a few times where I'm not sure I did exactly what the rules called for in a given situation, but it was so easy to resolve it with assigning advantage or disadvantage, I'm not sure I'm all that worried about it.

I was afraid that the technical issues and the miscalculation with the wolves would put a damper on the session, but for those that managed to stay in the game for the long haul, the adventure seemed to be fun, and ran more smoothly the longer went on.  I'm interested enough to run the game again, and I'm hoping that we can resolve any technical issues, and that I can trust my judgement and pay a bit more attention to what monsters can actually do, the next time around.

Posted by Jared Rascher at 6:17 PM