Earlier this year, the Dungeon Masters Guild started up. While I understand that it is not the ideal venue for every creator, I don't think it's a terrible option for anyone that fully understands the terms of the site and what you get and give up by using the site.

Despite being pretty invested in my schooling over the last year, I couldn't help but jump in and create a few items fairly soon after the guild was up and running.

The first product that I put up was a product that contained multiple player character races. I had, for a while, wanted to create some playable races that took a half step back towards the folklore or mythology that inspired some of the other races in the game. 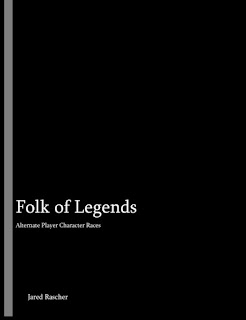 I'm not going to say its a revolutionary product. I had fun writing the product, and I hope that the people that have purchased the products so far have enjoyed it. Someday I'd like to invest some cash in some artwork to actually flesh it out better, so it's kind of a "living" project.

The second project that I put on the site was just a personal nagging issue I had. In 3.5, Dragonborn were already introduced into the Forgotten Realms setting, and then they were reintroduced, with a different background, in 4th edition. I don't think anybody else had a burning need to have these two things reconciled, but it was still in the back of my mind, so I did some connective work between the 3.5 version of the origin and the Tyranny of Dragons storyline that launched 5th edition. 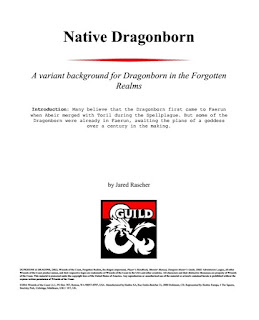 My point in bringing up this old news, beyond the fact that I never got around to actually writing about these products on the blog, is that One Book Shelf has multiple programs similar to the Dungeon Masters Guild.  The Cypher System Creator Program allows creators to play with the base Cypher System RPG rules from Monte Cook Games. The Cortex Plus Creator Studio allows creators to play with rules as presented in the Cortex Plus Hackers Guide. Mongoose has also opened up the Travellers' Aid Society, for creating Traveller RPG material.

While I'm not particularly well versed in Traveller, I'm very, very tempted to throw my hat in the ring for creating content for Cypher System and Cortex Plus. I'm nearing the end of the school year and graduation, and while I really, really need to focus on finding my shining new career, I may have to spend some time getting familiar with what I can and can't do using the various systems under these conditions.

Which brings me to a side point--in the beginning, I used to look at the Dungeon Masters Guild site every day, multiple times a day, to see what kind of products were being produced. There were some brilliant items, and I wanted to spend some cash to support fellow creators. But there was a lot of questionable content as well. But the most frustrating items weren't bad (well, some of them were), they were just flat out not following the rules.

Apparently being told you can publish material if you follows the rules detailed in X, to some people, means, I can publish whatever I want, rip artwork from wherever, and I'll let someone else sort it out. It almost made me embarrassed to have participated for a while.

That said, seeing awesome products like Kobold Press publishing supplementary material to their Tyranny of Dragons adventures, or the Classic Modules Today conversions makes me appreciate what the site really seems to have been created to do.

While I realize a much more impressive way to break into the industry is to own your work and your product from the ground up, I don't think these programs are bad for resume building. The fact that the parent company legally owns whatever you publish insulates them from problems they might have looking at unsolicited work or work owned by other creators. The biggest downfall is the sheer glut of material that can be produced, and getting your particular product noticed in a sea of pet projects.

Then again, I'm just having fun and not expecting much out of the process, other than a few coins here or there and maybe a good discussion about what I was thinking when I did whatever thing I just did.

Posted by Jared Rascher at 2:32 AM