What Do I Know About Reviews? In the Company of Giants (5e OGL)

Once upon a time, when I was still running Pathfinder, I started picking up third party products. I didn’t allow too many third-party products, but when I did, it tended to be items that were thematic to the campaign I wanted to run. One of those products was a supplement from Rite Publishing called In the Company of Giants. 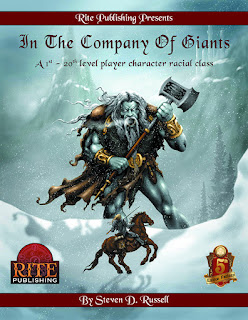 Rite Publishing did several “In the Company of” products, which were supplements that allowed players to play monstrous races. These supplements were inspired by the 3.0 Savage Species book, as well as the racial paragon classes introduced in the 3.5 version of Unearthed Arcana, but spent a little bit more time delving into one specific type of creature.

If you’ve been following me for a while, you know I have a weakness for giants. I have no idea where this comes from, but I love the huge sacks of hit points. Despite this, I never ran a campaign where I allowed the material from In the Company of Giants.

The Pathfinder version of the supplement allowed you to play a Jotunnar, a giant-kin race that had the option to take levels in a racial paragon class. They either took this class at 1st level and only advanced as a Jotun Paragon, or they stayed one of “the stunted.”

The Jotun Paragon would pick an element, and various giant styled powers were grouped under the elemental types. For example, an Earth Jotun Paragon could take options to emulate Hill Giants, Stone Giants, or even Ettin.

Recently it came to my attention that Brandes Stoddard did a 5th edition D&D conversion of the mechanics of this supplement, and it took me until I got home from work to pick it up and read through it.

Giants in a Moderate Sized PDF

The 5th edition D&D version of this supplement is 16 pages, including an OGL page, a title page, and the front and back covers. The front cover shows a frost giant about to clobber a rider on a horse, so I’m all for that. Interior art is black and white with a sort of runic border.

There are about five pages of background material about the Jotunnar included in this supplement. This covers some elements like appears, age, and naming conventions, but also includes a history set in the Rite Publishing setting of Questhaven.

It’s worth noting that many of the elements of giant philosophy presented in this background material lines up well with the Ordening and the concepts of Maug and Maat that govern the giants in the Forgotten Realms, so if you are using the current default D&D setting, the background presented doesn’t require a lot of manipulation to fit. 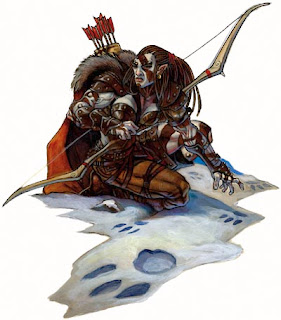 The Jotunnar look to be around the same power level of Goliaths, which seems to be a good judge of how powerful the race should be. They swap out negating damage for a chance to reroll poor saves, and they exchange the goliath’s athletic abilities for the ability to be more intimidating.

There is also an interesting sidebar that notes that the Jotun Paragon class is only available to “giant related races.” That means that if you happen to use races like Goliaths or Firbolgs, they should totally be able to take this class as well. It is also mentioned that the restriction is only for flavor purposes, so a human that is blessed by the giant gods might be able to take the class as well, for example.

The point of all of this is that the Jotun Paragon class for 5th edition D&D isn’t designed to be an “all or nothing” class, and is designed to be balanced more against standard D&D classes, instead of bundling a special set of rules together to form an alternate progression.

A Touch of Class

The class itself almost feels like a monk without Ki, maybe? It grants an alternate bonus to armor class, gives limited ability to do extra crushing damage a few times per short rest, and creates a slam progression for the character. The class also allows the character to eventually grow to Large size, and then to Huge size, but they retain the ability to return to Medium size when it is beneficial.

At 2nd level, the player must make a choice, not unlike other D&D classes in 5th edition. In this case, the choice is what Jotun lineage to follow. In this case, the choice is a more deliberate choice to follow the progression of a specific giant race. Unlike the Pathfinder version, that required the player to choose an element, and then bundled giant traits under those elements, these paths are more tailored to the specific giant race chosen.

My personal preference is for this version of the progression. Instead of picking specific abilities (that might be further modified by feats in the Pathfinder version), each path feels very thematic to the giant race chosen. The Jotun Paragon gains abilities that don’t just feel like a fire giant or a frost giant, for example. They feel like a paragon of fire giants or frost giants. For example, Fire Giant Lineage Jotun Paragons can enhance weapons in a forge, while frost giant paragons eventually gain freeze breath! 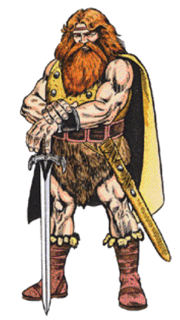 While the Jotun Paragon is getting more abilities, eventually, than the base giant lineage might have, all the powers they gain are very thematic for the fifth edition expression of those giants. In addition to the abilities mentioned above, stone giants on the surface can sometimes ignore damage, because the surface world is just a dream. Hill giants gain benefits from eating their fallen foes. Cloud giants and storm giants get magical abilities like creating illusory duplicates or (big shock) throwing lighting.

Giant sized weapons are handled in a special manner, just adding a level based extra die of damage instead of scaling for large or huge weapons.

Given that 5th edition places less of an emphasis on the same rules governing PCs and monsters, this seems to be a workable solution for limited some of the potential issues with triple damage weapons in the hands of the party.

Compared to the Pathfinder version, the 5th edition version of this product does not have the multiple pages of feats that modify the Jotun Paragon’s abilities. Personally, I’m not especially turned off by this streamlining.

Looking over the Pathfinder version of the product and seeing this conversion, this supplement captures what the concept was for the original product, and presents it in a way that feels very consistent with previous D&D 5th edition classes. That’s impressive, given that this is such a different concept than most classes in the game. Not only do the class features feel like 5th edition classes, they feel very much like the giant types that are being emulated.

It says so right in the title, but if you aren’t interested in giants, the product doesn’t stray from its topic. Unless you are building an NPC using PC rules, this is a very player focused product. While I think it adheres to theme better with the class features, compared to the Pathfinder version, the Jotun Paragon class is a bit less customizable, between the elemental options and the extra feats that aren't converted.

This product is a solid, thematic supplement that allows for a very specific thing. It creates a player option for running giant characters, and if the campaign allows for that theme to be explored, this looks to do it very well. That’s a specific niche, but at the same time, the product is worth looking at just to see how such a specific concept can still follow the 5th edition style so well.
Posted by Jared Rascher at 10:29 PM

Email ThisBlogThis!Share to TwitterShare to FacebookShare to Pinterest
Labels: D&D 5th Edition 3rd Party Reviews, In the Company of Giants, Rite Publishing, What Do I Know About Reviews