What Do I Know About Reviews? In the Company of Unicorns (5e OGL) 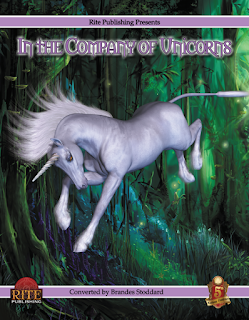 I’m an easy mark for D&D products that find a way for me or my players to portray classical fantasy creatures. I’m always more interested in finding out how to play a minotaur, centaur, or a giant, than being able to play a psionic crystal golem. Sure, those may be fun, at some point in time, but it’s harder to draw on folklore and mythology for your portrayal.

Depending on the edition of D&D, it’s can be harder or easier to portray more exotic creatures. Most of the time, it’s easier to stick with small or medium-sized humanoids than to venture into bigger or smaller, or less humaniform species.

Third edition Dungeons and Dragons utilized a mixture of effective character level and monster classes to flesh out more exotic creatures for PC use. Third party Pathfinder products picked up on this theme and Rite Publishing produce a line of products allowing PCs to be all kinds of non-human creatures.

One of those products, In the Company of Giants, was converted to 5th edition D&D, and it was one of my favorite third-party products so far. Being able to play a medium sized creature with the blood of giants, able to grow and tap into specific giant abilities, was great. It was something I wished I had access to when I was offering my players options in my Storm King’s Thunder game.

Today, I’m looking at In the Company of Unicorns, a product that, unsurprisingly, presents rules for playing unicorns and player characters in D&D 5th edition.

The Tome of the Unicorn

In the Company of Unicorns is a 19-page PDF. This includes the front and back cover, a full-page ad, and the OGL statement. Pages have a parchment background and silver borders, and there are bullet-pointed rules sections and tables to call out various 5e class and race elements. There are also unicorns all up in this artwork.

There is opening fiction that explains where unicorns come from, what they call themselves, and how they view other species in a standard D&D-esque world. We’re introduced to their name for themselves, the Re’em, the various subraces of unicorns, breaking down into two kinds of celestial unicorns, fiendish unicorns, and sylvan unicorns. We also find out about the most unicorn of all unicorns, the Silverman Exemplars.

Unicorn PCs spend enough time with humanoid creatures that they are intertwined with their fates, and as such, end up being susceptible to spells that target humanoids, but with resistance. They all have natural weapons with their horn and hooves, but can’t normally use standard weapons, and must get full on barding to defend themselves.

The main difference between the celestial unicorns and the ki-rin are that celestial unicorns pick up minor natural healing abilities, while ki-rin tend to influence good fortune, picking up the ability to cast resistance and eventually bless. Ki-rin also have a natural boost to armor class, enhance by their charisma.

Fiendish unicorns get to play with fire, as in use their horn to produce flame. Eventually they pick up the ability to cast hellish rebuke and darkness as well.

Sylvan unicorns are fey, and pick up resistance to being charmed, as well as using abilities like minor illusion, faerie fire, and eventually calm emotions.

There are several unicorn specific subclasses presented in this section, for paladins, sorcerers, and warlocks. The warlock subclass is available to non-unicorns as well, but it requires a backstory that has seen the warlock sacrifice a unicorn’s horn to their patron (unicorn warlocks that do this gain a few benefits to make up for the horn they sacrificed).
The paladin subclass allows the unicorn paladin special fighting styles that involve charging and trampling, and the special class features involve augmenting the powers of their horn and allowing them to run over any surface or fly.

There is also an ability introduced that allows a unicorn paladin to attune a magic weapon and channel its properties through their horn.

The class features of the sorcerer subclass delve into flavoring the unicorn sorcerer’s spells with druidic abilities or abilities that recall fey creatures, adding in extra spells and giving high-level unicorn sorcerers with this subclass the ability to “forgive” oaths and bindings on another creature.

The Pact of the Sundered Horn warlocks gain a bite attack if they sacrificed their own horn, and their bite does extra damage to those already injured. All warlocks with this pact do additional necrotic damage to blinded creatures or creatures in darkness.

The subclasses all hold together well for their themes. Reading the unicorn paladin, it feels like an effective conglomeration of abilities to make up for the unique differences between a humanoid paladin and a unicorn with the class. I love the feeling of going to an elder unicorn sorcerer to have some kind of powerful fey debt removed. While it has the least amount of space dedicated to it, just reading the flavor text for a unicorn sacrificing their own horn to their patron and that changes it brings makes me want to play a surly, broken horned unicorn warlock. Forgive me my edginess, it was an evocative description.

Silverman Exemplars have three specific unique mechanics. Inner Light is a reserve of points that lets them do special things with their horns that play up the traditional unicorn powers and amplify them. Spending inner light can heal, grant temporary hit points, cast spells, or eventually, even teleport.

Silvermane Exemplars can also gain two different states, Sorrow and Purity. They gain Sorrow when they do things like harming another creature, and Purity when they heal or grant temporary hit points. Sorrow and Purity are either on or off, and they have a die type associated with them. Under the right circumstances, they can “spend” these states and add the die type to their rolls.

The subclasses to this class are Noble Orders. The Noble Orders include the Order or Royals, the Order of Courtiers, The Order of Knights, and the Order of Knaves. Royals can attack or heal at a distance and remove conditions. Courtiers are good at charming others, avoiding damage, and performing their own form of one-shot sneak attack. Knights play with fighting styles and use their inner light to shore up their attacks and play with some battle master and bodyguard abilities. Knaves are good at hanging out with humanoids, going unnoticed, and working in tandem with their humanoid adventurer friends.

While Inner Light is a little like Ki in its functionality, they also have some broader applications. I’m really kind of fascinated at how Sorrow and Purity play with traditional unicorn themes using a game mechanic. It reinforces that even playing a hardened, dark-hearted unicorn, part of you may still feel some echoes of what you could be. It’s subtle, but I almost think subtle works better than heavier handed older edition approaches to forced alignment shifts and lost class abilities.

Yes, Sorrow is a resource you can spend to help you, but knowing that your character will feel the weight of sorrow when they injure someone informs gameplay.

Light of the Heavens

The class features of all the subclasses are so evocative of the material, you never lose sight of what kind of creature you are playing with these options. Knowing that creatures with these class features could exist in the campaign open storytelling potential that nudges the game towards interacting with unicorns and even a greater unicorn culture.

I really like how Sorrow and Purity work to subtly reinforce the themes of the Silvermane Exemplar, and I love the unicorn backstory informed by the subclass features of the Elder Unicorn Bloodline and the Pact of the Sundered Horn. The product doesn’t just give you advice on how to play a character with these options, but the mechanics reinforce the weight of the story elements.

There isn’t much wrong with this product, but it is very specialized. Any kind of humanoid tends to be more versatile for D&D style adventuring, so while the fixes for playing a non-humanoid creature are good, they are still fixes that need to be addressed.

I expected to like this product. I was not expecting the degree to which the mechanics would intrigue me and play into the themes being presented. I expected to like it, but I didn't expect to start building characters in my head using these options as I was taking notes.


Now, if you’ll excuse me, I’m going to go try to convince someone to let me play my surly fiendish unicorn warlock with a deeply buried heart of gold in a campaign.
Posted by Jared Rascher at 6:00 AM

Email ThisBlogThis!Share to TwitterShare to FacebookShare to Pinterest
Labels: D&D 5th Edition 3rd Party Reviews, What Do I Know About Reviews