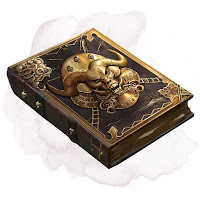 Are you like me, and enjoy the concept of spellbooks as treasure, but don’t like to detail individual spells in that appear in the book?

Have I got an idea for you!

Part of this concept comes from the idea that some spellbooks literally are just a wizard jotting down notes for something he wants to try in the future. Some of those notes may be so well detailed, it would be easy for another wizard to look at those notes and complete the spell formulae.

Instead of detailing every spell in the spellbook, under this method, we’re just determining three things--rarity, theme, and spell levels.

Rarity runs parallel to the rarity level of items in the DMG. A spellbook will have the following rarity:

For purposes of selling a spellbook, treat the spellbook as a consumable item if you are using the rules in Xanathar’s Guide to Everything.

A theme defines the general kinds of spells that will be found in the spellbook. You can be creative with your themes, but in general, the easiest theme is to utilize the schools of magic, such as abjuration or necromancy. If you are using the Deep Magic supplements from Kobold Press, this would be a great way to introduce a book of clockwork magic or time magic.

You could also have a theme like “fire” or “ice” spells, but in this case, you may be doing more adjudication with your players as they brush up against the edges of what your invented theme entails.

For each die of spell level you sacrifice, a spellbook may have an additional theme. See the next section, right here . . .

A spellbook will have several spell levels’ worth of spells based on the following:

The spellbooks have whatever spells in them that the spellcaster wishes to find, and for each spell detailed by the owner of the book, subtract that many spell levels from the book as “defined.”

If someone rolled the bare minimum spell levels for a legendary book, they would start with 15 spell levels. They want to be able to add Meteor Swarm to their own spellbook, so they state that the spell is present. This means that there are still seven more levels of spells in the book to be defined. That could be seven first level spells, a fourth level spell and a third level spell, or any combination that adds up to the seven remaining spell levels.

As with other aspects of 5th edition rules, I added the average number of spell levels, in case you would rather just use that instead of rolling.

Why Aren’t the Individual Spells Worth as Much as the Book?

If you assume that these books are “workbooks” filled with “almost” complete formulae from wizards that were talented enough to write for a broad audience, you can also assume that not every wizard will get the same exact items from the spellbook. Another wizard may look at this spellbook and see a whole other set of formulae they can easily complete to add new spells to their spellbooks.

But to communicate this clearly--no, your party wizard can’t sell their spellbook and get cash for it if they have the requisite number of spell levels in it. Treasure spellbooks are exceptionally well written and open ended.

Posted by Jared Rascher at 2:18 PM