What Do I Know About Reviews? Ki Unleashed (OGL 5e) 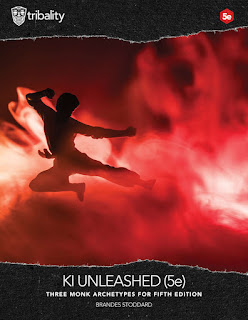 One of the things that I really like about 5e D&D is that the subclass system has, to this point, been a really strong way for the game to keep core elements of the game (in this case, classes) fresh, while introducing new options. While the subclasses can feel very distinct, unlike the proliferation of classes towards the end of 3.5 or 4e, you are still likely to recognize that the party has fighters, rogues, wizards, clerics, etc.

To me, I have a much easier time accepting new subclasses than I do new classes (I say, after allowing the Warlord and the Warden in my most recent campaign). That said, I am much more likely to enjoy those subclasses if the abilities tell a consistent story.

This particular product is eight pages long, with a cover, table of contents, and OGL statement. That means we’ve got five pages for three monastic traditions. It’s a nice and cleanly formatted PDF that is easy to navigate and read.

We’ve got five pages, so I’ve got to be careful that I don’t let myself write a review that’s longer than the actual product, so I’m going to try to sum up. The three traditions we have in this book are the following:

The Way of Lost Souls is a monastic tradition that is dedicated to helping souls cross over to the other side. They do this, in part, by bonding with a lost soul, which also gives the monk various powers. You can choose a lost soul that gives you access to radiant, psychic, or necrotic damage, and you can spend ki points to cast spells associated with that choice (bless, command, or inflict, in this case). At higher levels, this soul allows you to do extra damage of the type associated with you lost soul (6th), create a damaging field around you (11th), and manifest your lost soul as a ghost (17th).

I think this tradition stays on point for the story it is trying to tell with all of its class features, and in addition, unlike some monk traditions, it feels like a monastic tradition, not just a martial artist that learns supernatural attacks. The sidebar also has some nice ideas for who your lost soul is and how you might interact with them.

The Way of the Silver Chain is a monastic tradition that learns how to use their silver cord (the spiritual thread that connects you body and soul and trails out after your spiritual form when you travel the Astral plane) as a weapon. The goals of the tradition are mentioned as being opposed to nightmares, astral horrors, and creatures vulnerable to silver.

I’m a little torn on this one. I like all of the mechanics, but the purposes of the order are a little bit scattered. I’m not sure what history leads you to study your silver cord to use as a weapon against werewolves, but also astral horrors and nightmares. I think just emphasizing that the tradition utilizes lucid dreaming to get in touch with their astral forms in order to master their connection to the spiritual might have been a more coherent origin. Also, grappling big things is one of those things that can be really useful when it’s useful, but might be kind of situational. That said, I really like the boost to maximum hit points that doesn’t nerf the potential temporary hit points you might get from other class abilities or spells.

The Way of the Wild is a monastic tradition that learns abilities by tapping into the primal forces of nature in their style. When choosing this tradition, you pick two of the styles associated with the style. This gives you access to stance which gives you various abilities based on the stance, and costs 1 ki at the beginning of your turn to enter. At 6th level, you get a strike associated with your stance, which you can spend a ki point on to add an extra effect to your attacks. At 11th level you get an ability that changes your maximum ki points, and at 17th level, you get a new stance.

Depending on how you want to flavor “tapping into the wild,” this could be the monk that really gets along with druids and rangers, or a martial artist that has learned a lot of very traditional sounding martial arts abilities that at some point in the past were based on studying nature. I really like the stance + strike setup of the subclass, as it really reinforces the feel of a martial artist, but it seems like it could definitely burn through ki quickly, and the boost to ki points doesn’t kick in until 11th level.

I think the Way of Lost Souls monk is a great combination of flavor, mechanics, and story that very clearly communicates what the subclass is about. The Silver Chain monk has some great, imaginative abilities that play with the cosmology and story of the game to produce effects. The Way of the Wild feels very much like a martial arts class by introducing concepts like style, stances, and strikes. The mechanics of the classes are clearly and strongly realized.

I don’t think its bad design, but The Way of the Wild could cause some ki option paralysis until the amount of ki opens up later on. I think all of the mechanics of the Way of the Silver Chain hangs together, and the “implied” story works great, but the introductory explanation of the order and the sidebar on dreams doesn’t feel as strongly represented in the class itself.

If you even remotely like monks or want to see some strong D&D subclass mechanics, you really should pick up this product. Despite my commentary on storyline drift with the Silver Chain monks, the mechanics still tell a more coherent story than many official D&D subclasses, the Way of the Wild is a great example of how to reinforce the feeling of martial arts in the class, and the Way of Lost Souls is one of the best examples of both mechanics and narrative structure realizing a unique story and compelling story for a class.
Really, unless you don’t like 5e at all, pick this up.

Posted by Jared Rascher at 5:00 AM

Email ThisBlogThis!Share to TwitterShare to FacebookShare to Pinterest
Labels: D&D 5th Edition 3rd Party Reviews, Tribality, What Do I Know About Reviews