What Do I Know About Reviews? Into the Dark (Forged in the Dark) 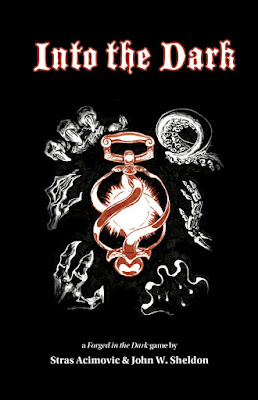 Today I’m looking at Into the Dark, a decidedly slimmer implementation of the Forged in the Dark concept. While still mission-based, at only 50 pages, this game definitely takes the concepts introduced in Blades in the Dark in a different direction than some of the earlier iterations of Forged in the Dark games.

What Kind of Load is This?

This review is based on the PDF of Into the Dark. As mentioned above, this comes in at fifty pages. The book does not contain an index, but given its size, that probably isn’t the impediment it might be to a larger game.

The book, from cover to cover and the pages in between, maintains a red and black color scheme. Bold red headers introduce sections of the book, and various black and white illustrations are highlighted with elements of the image called out in red. There also several well-formatted tables throughout the book.

The setting of Into the Dark is a fantasy post-apocalyptic setting. The Murk, a general darkness, has fallen over the world. While the pre-Murk world was more advanced, the level of advanced, the pre-Murk world is largely undefined outside of the ability to add various modern or futuristic elements to ruins. The current world is largely medieval in technology and outlook.

Nightwells open up in the world, and spew out Murk and vile creatures associated with it, and in various temples on the surface, the Silver Flame is maintained to keep the Murk at bay. Murkdelvers, the adventurers of the setting, are tasked with taking a silver flame into a Murk invested region and dropping it into the Nightwells to shut them down. Along the way, they can scavenge for items that they can resell so that they can better outfit themselves for their tasks.

This section doesn’t waste much time before jumping right into an explanation of the setting and what player characters are expected to do in the setting, which I can appreciate. In addition to introducing the world, we’re introduced to the modified means of rolling to resolve challenges, which consists of rolling a number of dice equal to a relevant trait, and comparing the highest d6 to a failure/partial success/success paradigm.

Gear has a rental price and a purchasing price. Unlike other Forged in the Dark games, the assumption is that players will outfit themselves intentionally before they head into the Murk, and until they can scavenge some items, they will likely be doing it with equipment they have to return.

It is possible to have a 0 in a relevant stat, meaning you have no dice to attempt the task. Unlike other Forged in the Dark games, granting bonus or penalty dice for advantages or disadvantages is much more common, so it usually only takes a little narrative work to explain how something impossible can have at least a minimal chance at success.

Most of the equipment also exists primarily as narrative permission, rather than have proscriptive statistics. A compass that functions in the murk just helps you navigate, but if you have to make a check where knowing what direction you are going is important, it’s a built-in bonus die as long as you describe what you are doing with it.

For anyone familiar with other Forged in the Dark games, there is no position and effect component to the game.

The game has four different archetypes for player characters:


Murkhunters can carry more load, are better with armor, and do more damage with heavy weapons. Lightbearers have seals they can sacrifice to ward off malevolent magical effects, gain bonuses to using healing kits, and can do special tricks when attuning to the silver flame that the party caries. Shadowbinders can touch and manipulate the Murk without (for the most part) becoming corrupted, they can conjure creatures from the Murk to help them with tasks, and they know where to sell sketchy material found in the Murk while on a mission. Explorers do extra damage when they ambush, they get some tricks to make alchemical items more effective, and they are better able to manipulate traps and fix gadgets.

The mechanics for many of these effects are extra dice when attempting certain tasks, or extra dice when rolling for damage or to heal others. Each of the archetypes also has a unique set of gear tied to their profession that they can choose from in addition to the general list in the previous chapter. Each of the archetypes also has six or so unique XP triggers that reward players for performing the role that the archetype usually fills in a group of Murkdelvers.

The gameplay is very similar to other Forged in the Dark games, but is much more focused on the actual mission elements, and is much less procedure-oriented. Instead of harm, characters have a number of health points, as well as a stress track. When characters suffer negative effects, they can attempt to resist the effect by marking off stress, often ignoring or halving the numerical value of the effect on themselves.

Characters that reach 0 health are dead, meaning it’s always good to have some stress to spend for resisting damage. Characters to go past a certain corruption threshold become NPC monsters, mutated by the Murk.

Load is an interesting game mechanic in the game. In other Forged in the Dark games, having a heavy load makes you more noticeable, which can cause complications, but Into the Dark mentions that Murkdelvers with a heavy load will always go last in combat situations. This is an interesting means of adjudicating a rule in a game without a rigid initiative system.

The rules are only lightly explained when they are introduced, with most of the explanation being delivered in the various examples given in the examples of play section. This section specifically introduces all of the characters in the scene, and carefully lays out what is happening, but it doesn’t the same “what would you do” questions at the end of each scenario, like some of the Forged in the Dark games that have come before.

There are several sample adventures in the book, but adventures in this instance include the primary opposition, locations, and obstacles between the Murkdelvers and their goal, as well as what kind of items they might be able to scavenge from the location.

There isn’t a dedicated bestiary in the book, but there are a wide variety of creatures provided across the different adventures, allowing for a good range of tools to either mix and match, or to tweak for slightly more customized creatures.

I’ve said before that I like an RPG to have sample adventures to see how the designers expect the game to be run. In this case, I appreciate that the expected “prep” is essentially to have an outline of a few items that might get in the character’s way, with all of the details being filled in by complications on various rolls and the decisions made by the players.

The final section of the book contains some extra tables for generating details for the moving pieces of an adventure. Previous tables introduced in the book aren’t reprinted, which keeps the overall product a bit more streamlined, but like many Forged in the Dark games, these tables can go a long way to generating a mission with a very short amount of prep time.

I like how quickly the game jumps into its narrative, and how easily it flows from the overview of the setting and the expected modes of play into the general mechanics of the game. One thing I was struck with when reading the original Blades in the Dark is that I wish there was a “basic game,” something that layered on the new concepts one at a time, without immediately introducing all of the interlocking procedural elements, and that is very much what this game is providing. The setting is a strong concept that is presented concisely, which is good, because a setting this evocative could easily get bogged down in details that don’t contribute to the core experience.

The adventure outlines have a summary at the beginning that I appreciate and wish more games/adventures would formalize in a similar format.

This happens a lot, but one of the things I like the most about the game is also potentially one of its issues. While I like how quickly it jumps from setup to story to rules, it may do that a little too quickly, and a few more pages of summaries at a slower pace might have been nice. As much as I like the slimmed-down mechanics, especially as a means to introduce the concepts of Blades in the Dark to new players, some of my favorite aspects, such as flashbacks and flexible gear, get excised from this implementation. Because of the pace at which elements are introduced, I wonder how well someone that has never encountered either a Powered by the Apocalypse or a Forged in the Dark game would pick up on the flow of the game just from reading this book.

While I appreciate the summaries of the adventures, which include what is effectively a content warning system, there isn’t much room in these 50 pages for safety discussions, and some of the horror elements of the setting might warrant some careful consideration.

I really enjoy how fast-paced and concise this game is, and it feels very evocative without being too dense. This feels like the kind of game you could pitch and have at the table, ready to go, very quickly. Any confusion that I’m concerned about doesn’t come from poor descriptions or stilted language, so much as the pace at which concepts are introduced.

If you want a more narrative leaning game about post-apocalyptic dungeon delving, and some weird fantasy adventuring with light gear management appeals to you, this should be a satisfying purchase. Alternatively, if you just want to see what a “basic game” version of Blades in the Dark might be, especially considering how much design space Forged in the Dark games have grown to encompass, this will be a good primer for your curiosity.

Posted by Jared Rascher at 5:00 AM

Email ThisBlogThis!Share to TwitterShare to FacebookShare to Pinterest
Labels: Forged in the Dark, Into the Dark, What Do I Know About Reviews