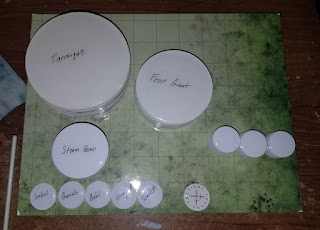 A few weeks ago I wrote a blog post about items I wish existed for D&D 5e, and Joe Cwik, on the Gaming and BS Forums pointed out that, while the tokens I was outlining may not exist, there was a range of variable-sized dry-erase tokens available from Tactical Tokens. While it wasn’t exactly what I was looking for, it was a pretty close fit, so I put in an order for a few of them in varying sizes.

The total order was this: 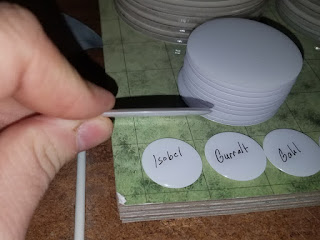 Tokens, Miniatures, and Me

This is just my personal issue, but I would much rather use a “generic” token than use the “wrong” token for something I am representing in a game. I don’t mean that I won’t use someone with an axe when I only have a similar character with a sword, but I hate using a blue dragonspawn when I wanted to represent an owlbear.

As it turns out, I couldn’t entirely remove myself from tactical representation. I picked up some Pathfinder pawns when I was playing 13th Age, not because I needed to strictly represent distances, but because it was nice to be able to track relative positioning. I also ran a lot of Savage Worlds one-shots for a while, so I picked up multi-colored glass beads for all of my representational needs.

None of that quite provided exactly what I wanted in my GM toolkit. 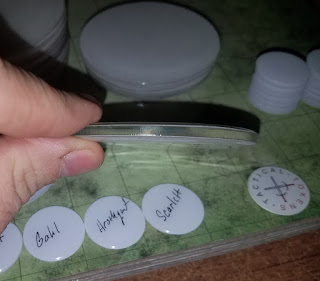 Back to the Present

Flashing forward again, I’m 100% back into running tactical games, now that I’m regularly playing D&D 5e. I have several sets of Pathfinder pawns, as well as some Kobold Press pawns from their Tome of Beasts and Creature Codex Kickstarters. While I love having some of the great monsters with the art from the books, there are definitely times when I just want to have some tokens to throw on the table.

How Did You Determine How Many to Order

This is easy. Whenever I think of miniatures, I think, “how many frost giants would I like to throw at my players,” and then plan from there. 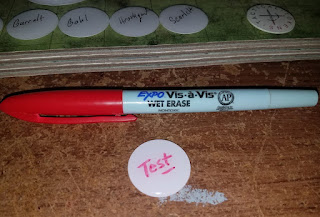 The 1” and 2” tokens have an interesting kind of static connectivity where large stacks will stay connected with one another. The 3” and 4” miniatures are more of a thicker coated plastic and don’t have the same kind of attraction to each other.

Because of this clinginess, I was wondering what would happen if I placed them on my tactical board, but they don’t stick to that, making them easier to slide around (although, this also means they don’t stay in place if you bump your table, but that’s no different than standard plastic miniatures or cardboard miniatures).

I wrote some names on the various sized tokens to see how well they could be erased. For my dry erase cards at the table, I have been carrying a Staedtler correctable dry erase pen, because most other fine tip dry erase pens I have used are . . . not good for what I need them to do. 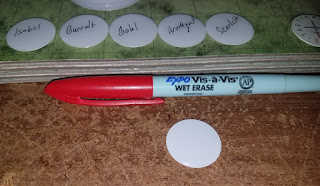 In this case, I could use the erasable back of the pen to remove the name I wrote very easily. Using a microfiber cloth to erase the names took a little more effort than the built-in eraser on the Staedtler, but it still worked. I’m actually not upset that it took some effort to remove the name, because it came off clean, and didn’t smudge without effort.

In addition to the Staedtler pen, I also tried an Expo wet-erase marker on one of the tokens. The red on the marker dried quickly, and didn’t smudge with my finger. I couldn’t get it to come off with the eraser or the microfiber cloth, but the second I held the token underwater, the wet erase marker came off.

On their website, Tactical Tokens also offers some pre-printed tokens, with an essential bundle, goblin tokens, and hero tokens.

This is a simple concept, but these work as well as I could hope for my gaming needs. They provide a no-smudge surface in multiple key sizes for the games that I run which require tactical representation, and they work with the dry and wet erase tools I’m already using.

While there appears to be a Kickstarter coming soon for the larger sizes, there isn’t a nice variety pack for all of the different sized blanks for a single order. While there were bundles for the smaller tokens, the larger ones had to be added to the order individually.

I’m looking forward to giving these a spin in my next session. As much as I like having the lovely art from the Tome of Beasts and Creature Codex available for my Margreve games, I also like knowing that sometimes I can just throw a package of blank tokens into the kit for the evening and not worry too much about picking out just the right monsters.

If you are playing any kind of game that would benefit from tactical representation, and you don’t want to worry about having the exact miniature for the game you are playing, you could probably do much worse than to give these a look for your gaming needs.
Posted by Jared Rascher at 6:25 PM