What Do I Know About Reviews? Xanathar's Enemies and Allies (Dungeon Masters Guild Product) 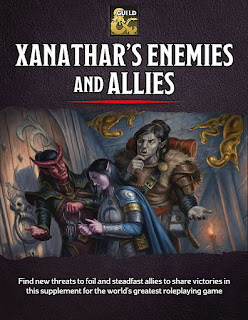 I am a big fan of having lots of NPC stat blocks, especially in Dungeons and Dragons. While I don’t think they were executed as well as they could have been, I liked the concept that D&D 3.5 attempted with adding in different “monsters” with class levels in the Monster Manual 3 and 4, and I think one of the things Pathfinder did right in this regard was to market a product as only stat blocks for various levels, so purchasers didn’t go in wanting brand new monsters and getting a more utilitarian product.

Because of that thought process, I wanted to pick up Xanathar’s Enemies and Allies, a Dungeon Masters Guild product that came out close to when Xanathar’s Guide to Everything was released. Because there has been much real-world chaos, this one fell off my radar for a bit, but I wanted to revisit it.

Structure
Xanathar’s Enemies and Allies is a 44 page PDF. The formatting looks spot-on for the D&D 5th edition standards, and it uses existing artwork to illustrate the various NPCs. There is a title page that includes credits and legal information, and inside cover illustration, and a table of contents. There is also a one page summary of stat blocks by CR. The rest of the product is filled with stat blocks, one or two to a page.

Faces in the Crowd
The product is grouped by themes, often tied together by introducing power groups and organizations from the past of the Forgotten Realms, or by introducing newer groups tied to the lore of the setting. The individual NPCs all use character options introduced in Xanathar’s Guide to Everything.
I am very interested in seeing NPC stat blocks based on subclasses, especially since many of the 5e stat blocks that emulate a subclass don’t literally port a player character sheet into NPC format, but rather pick out a few signature abilities that would show up in NPC interactions.
I also like to have a wider range of NPC stat blocks at multiple challenge ratings. I am a fan of having evil warriors, spellcasters, priests, and assassins at all levels of a campaign, in addition to ever larger and weirder monsters. In the context of the Forgotten Realms, I also like having the building blocks for potential rival adventuring parties. All of that having been said, let’s look at how well this product pulls this off.
Challenges

The challenge rating for these NPCs stretch from CR1 to CR 13, so while you don’t have NPCs in this product for the loftiest challenge ratings, it definitely provides more options moving into tier three play. There is a lot of concentration around CR3 and CR9, and there are 50+ NPC stat blocks total.
The NPCs are “general” NPCs, meaning that they represent an archetype of characters, not a singular “named” character.


While many of the religions that get NPC representatives have been touched on by 5e material, many of the nations have not been visited, and a few organizations have been referenced that aren’t regular staples of 5e adventures. I appreciate this in that 5e D&D both is and isn’t the Forgotten Realms. What do I mean by that? In a lot of cases, Forgotten Realms lore is pertinent, and added to the adventure, but in other cases, many Forgotten Realms specific elements are ignored in favor of bringing in more broadly “D&D” threats. This is a long topic for another day, and I’m pretty sure I’ve touched on it elsewhere.
Essentially, we’re getting a few deeper cuts, and a wider view of the Realms beyond the Sword Coast. The biggest downside to this approach is that since these stat blocks are meant to showcase the options in Xanathar’s Guide to Everything, there isn’t a separate call out to detail the faction that the character is affiliated with. I realize this would have potentially caused some concept drift for the product, but I would have liked a simple paragraph about the organization and some bullet points on what it means to work for the organization and what their goals are. In many cases, this information is present, but it has to be reverse-engineered from the details about the NPCs.

For most of the entries, there are a few paragraphs generally describing the group of NPCs to be detailed, and then a few more paragraphs that give specific details on how these NPCs serve their organization. For example, the Blingdenstone Badgers have an entry that gives a paragraph on Blingdenstone, and then three paragraphs talking about how these specific NPCs defend and inspire their community, and operate in combat.

Like NPCs in other products, these aren’t just PCs in NPC stat block format. Most abilities are expressed as “X/day” abilities or as recharge abilities. While many of the NPCs are given the spellcasting ability appropriate for their subclass, and have some of the signature abilities of their subclass, they often have other thematically appropriate abilities that aren’t present in their subclasses. For example, the Scythe of Jergal gains an ability to attack bloodied opponents with advantage. This stat block is based on the Grave Domain cleric, and gets the signature Sentinel at Death’s Door ability, but the advantage versus bloodied opponents isn’t something the subclass normally receives.

There are some interesting story element choices made by combining some bits of lore with some of the classes included. In some cases, this is taking existing political entities and detailing new agents or military units from the region. Other choices aren’t decisions I wouldn’t have made, but I like the concept, and can follow the logic. For example, Malkizid is a fallen celestial, not unlike Zariel. The warlocks affiliated with him have the Pact of the Celestial, and honestly, I don’t think I would disagree that it works, since it was an aspect of who Malkzid was, and how he presents himself to potential followers.

There is a split in philosophy based on some of the naming conventions used, which causes me to weigh in on a few things. Xanathar’s Guide to Everything introduced the Kensai and the Samurai subclasses. A lot of long time players want East Asian subclasses in the game, even if those subclasses represent archetypes that are similar across different cultures, for the level with which Dungeons and Dragons relates to those archetypes. For some players, these subclasses are meant to represent characters from East Asian analogous cultures.

So, in this particular product, we have kensai, who are represented as dwarven warrior monks from Citadel Adbar, and samurai, who are Kozakuran adventurers. I want there to be more diverse representation in D&D, even though I’m not fond of overly Earth analogous countries in the Forgotten Realms. I would have rather had Kara-Tur representative characters that didn’t have East Asian named subclasses in this supplement, so we can see what about a Samurai, in D&D, makes it an adventurer archetype, other than “East Asian Knight.”

The choice I’m having the hardest time with, however, is with the Eldreth Veluuthra. The Eldreth Veluuthra were elf supremacists in previous editions of the setting. They first came about from families that disapproved of humans allying with elves to form Myth Drannor, and they decided that humans were vermin that needed to be exterminated, and that they needed to put elves in power that agreed with them, for the good of all elves.

In this product, the Eldreth Veluuthra are presented as having been “more extreme” in the past, but their main goal is “defending nature,” and they were overzealous about that in the past. On one hand, I understand the difficulty of presenting a full-on racial supremacist organization, but on the other hand, “reforming” a racist organization in this era by saying they had some good ideas and just went astray, really does not sit well with me. It reminds me way too much of how many modern hate groups have survived to the modern-day. I am certain this isn’t what the designers intended, but it echoes too much given my previous knowledge of the organization.

In fact, one of the reasons I liked having the Eldreth Veluuthra as villains in the past is that they represented the idea that elves are often considered “good,” and these are clearly surface elves that are reprehensible and evil. It was an example of breaking biological alignment determinism, and it was an example of doing it by showing that racism is evil. I can understand trying to decouple any fantasy racism from the main narrative of the game, but I don’t think the best way to do it is to reform an existing group that was specifically noted for their supremacist ways.

There are a wide range of stat blocks for anyone that wants more NPCs to use in their games, and with a wider variety of concepts based on the newer subclasses in D&D. In addition to more NPCs with a wider range of challenge ratings, some NPCs utilize other elements of the game that don’t get used as often, such as goliath NPCs. Even if a game focuses on the Sword Coast, it’s nice to have backgrounds based in the wider Realms to at least hint at the broader aspects of the setting, to make the world feel bigger and more diverse.

I really wish the individual organizations had gotten a little more utilitarian write up, so that they could be used as factions for player characters, or better integrated into wider plots for the GMs. It's nice to see some information in 5e on these older regions and power groups, but it’s great when that information doesn’t have to be reverse-engineered from context. The issue with the Eldreth Veluuthra is probably going to vary a lot based on your previous knowledge of the group, but for me, it resonates too much with current real-world revisionism to not feel like a sour note.

Tenuous Recommendation--The product has positive aspects, but buyers may want to make sure the positive aspects align with their tastes before moving this up their list of what to purchase next.

I wanted just a bit more broad utility from this product, and I’ll admit, I really have to think about how much unintentional parallels to the real-world subtract from the usefulness of a product, but at the moment, it definitely is something that weighs on me. Mechanically, these are great, but from a setting perspective, and with story context, I’m having a harder time giving it a broader recommendation.
Posted by Jared Rascher at 1:40 PM

Email ThisBlogThis!Share to TwitterShare to FacebookShare to Pinterest
Labels: Dungeon Masters Guild, Dungeons and Dragons 5th Edition Reviews, What Do I Know About Reviews