Yup, I broke down and checked it out.  I have a few weaknesses.  One weakness is that I have a very hard time when others can (rightly) say that my opinion isn't based on fact.  It makes me want to go out and gather facts.  My other weakness is that I love DC Comics, even when they suck.  Doesn't mean I'll keep reading, mind you, but I do love the DC Universe and their characters.

With that disclaimer in place, what have I read so far, and what did I think?  And do you care?  And should you?  And if you do, what does that say about you?  Erm, back on topic . . . 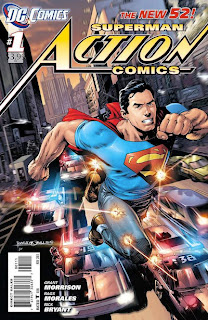 Man, they got me to buy a Grant Morrison book.  This isn't going to be the best review, as I've got a lot to get through.  It's not as radical as it was touted, but it also doesn't feel that much like Superman to me.  It doesn't even feel like Smallville.  Strangely, it doesn't even have much of Morrison's trademark WTF moments.  Superman doesn't have all of his powers, and he's willing to break every bone in someone's body, but probably not kill them.  And Lois' father is still playing evil general.  May check out another issue, but leaning towards no.
Oh, and with a nod towards "new reader friendliness," unlike Justice League, it's pretty easy to get lost in where this story is taking place.  I figured it out because I've read a ton of interviews. 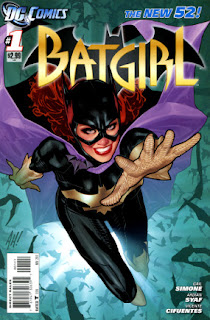 Not a bad book, and not a horrible one for jumping on.  You find out pretty quick that Barbara got shot and is just getting back into the hero game, and the villain looks interesting.  It seems unlikely that she was ever Oracle, given the time frame mentioned in the book, which is disappointing, but overall, if everything were rebooted  (sigh, which it's not) that would be a less annoying nit pick.  Jarring to see Jim Gordon made younger, and I'm not sure the point. 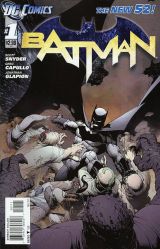 I'm hearing a lot of people saying that this book is a break out hit of the new 52.  It's not bad, but I'm not getting the break out hit thing.  We get introduced to a lot, see Bruce interact with a lot of his supporting case, and get a vague hint about a conspiracy/mystery that will play out eventually.  Enough to make it worth while to check out another issue maybe, but "not sucking" really shouldn't be the standard for "hit." 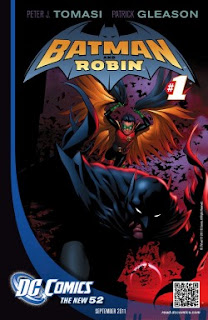 Full disclaimer:  not a big fan of Damian.  I liked Son of the Demon, and I liked Bruce's son in Kingdom Come . . . Damian isn't that guy.  Still, between Red Robin, Batgirl, and even Batman and Robin that I read in the "old" DCU, Damian was kind of starting to mellow and grow on me a bit.  So to make a point, now that Damian is paired with dad again and for the new readers, his jerk factor goes up.  Also, with the references to Batman Inc., Bruce's disappearance, and Dick's time as Batman, you wouldn't even notice a reboot.

I guess that's good for people that really enjoyed the direction of the Bat books, but man is it jarring reading this mix of old and new universe.  Yet, despite all of that, I kind of enjoyed this one, despite not liking Batman Inc. or Damian.  Go figure. 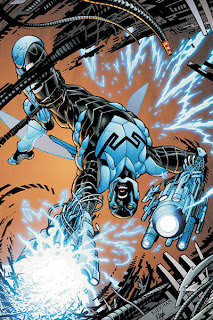 As much as I loved Ted Kord, Jaime really grew on me.  Between the Brave and the Bold cartoon and Generation Lost, I was convinced that I could live with Jaime as the Blue Beetle, because he was great.  He was funny, energetic, charismatic, and likable.

I didn't mind this issue.  It starts from scratch, with Jaime getting his powers.  It was even nice to see a few B list DC villains show up.  But I couldn't shake the feeling that it feels a bit too soon to retell Jaime's story with minor tweaks, and I have to admit, from all of the Spanish exclamations I felt like there was a bit of "hey, look, a Latino hero!"  Maybe I'm just cynical.  Overall, it's okay, but I hope they get some of Jaime's personality back into the book. 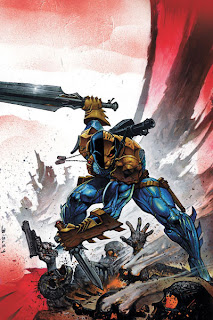 I haven't harped on art much thus far, but I'll mention it here.  If you think the costume looks a little impractical on the cover, you should see it inside.  The stuff looks like vaguely high tech full plate with random spikes and blades on it, that somehow don't snag on door frames or stab Slade when he walks.  It's a mess.  And why is the mask now a helmet with a face plate that swivels up?

Okay, art out of the way.  The author wanted to reinstate Slade as the number one bad ass metahuman assassin in the DC Universe, minus any hint of failure or positive traits.  No family, no regrets, no higher purpose, and no loosing.  So in this comic, Slade pulls off a really hard assassination, double crosses his allies, and has multiple people mention how bad ass he is, even though we are introduced to an undercurrent of doubt that he's getting too old to be at the top of his game.

Slade's a good assassin that is a jerk.  No need for me to read any more.  Mission accomplished, and in just one issue!  Nice work.  I just don't miss the 90s and comics with "Death" in the title that much to keep reading.  I kind of like Slade as a bad ass because he pulled off things like introducing Terra to the Titans, instead of measuring bad ass in gallons of blood and body count.

I think this would be a better, more interesting book if it were about Slade getting the better of established DC heroes and villains.  Not killing them, mind you (not because I don't want Slade to kill, but because I don't want to loose good heroes and villains), but out maneuvering them and pulling off some mission or another right under their noses.

That wasn't all I got, but it's all I got time for at the moment.  Hopefully I'll have time soon to keep going.
Posted by Jared Rascher at 10:29 PM