I know, the title contains a spoiler.

Anyway, I've been playing DC Universe Online since its free, and I'm curious as to what got tweaked after my beta testing days.  Turns out, some of the stuff that didn't work or was silly wasn't so much reworked as just yanked out of the game.  But I digress.  On to our tale of online socialization or lack thereof.

One of the boss fights in the game has to do with you taking on the Titans, who are possessed by Raven, who is herself possessed by Trigon.  You fight the Titans one at a time, and the first one out of the batter's box is Cyborg.

Cyborg was the subject of a bit of tweaking by the programmers.  Literally one day I went in and blasted the Hell out of him, and it just took a little bit of care and strategy to dodge and weave until he was down for the count.  Two days later, after the patch, Cyborg was given more hit points and instead of healing himself once when he gets down to 30% of his health, he always heals himself when he hits 30% on his health.

I dodged around the possessed million dollar Titan for a really long time.  It's not that he does horrible damage  (he stuns you with some attacks and has a few that hit for okay damage), it's that he always heals himself at 30% of his health.  I just kept circling and circling, and eventually I died because I got pissed off and careless.

I attempted to use my two abilities that lock down opponents.  I have one that roots an opponent to their spot, and another that turns them into a dog, so they can wander around but can't take any actions except for movement  (I know, I have no idea why a dog, but it amuses me).  I managed to do both of these "lockdown" abilities while Cyborg was healing himself, and neither one interrupted him.

I told you that story so I could tell you this one.

I decided to go to the SOE website to see if there was something simple I was overlooking, and lo and behold, I was validated that Cyborg was, indeed, upgraded.  Someone casually asks how to take Cyborg down because they don't know how to beat him with his upgrade in power.

This is where the elite of humanity comes out to play.

First, there is the somewhat forgivable phenomenon of people talking about how Cyborg was easy when they fought him, and seemed to miss that he was upgraded in a patch.  Okay, reading comprehension is off, but we can live with that.

Then comes the people berating the original poster for even asking the question.  On top of that, the original poster, and the few brave souls willing to admit they too were having problems, were informed that they shouldn't ask anything unless they intimately knew the controls scheme of the game, because clearly if you know how to dodge, block, and combo, you should never ever have to ask how to defeat something.  Ever.

I know I shouldn't be surprised now, but it still kind of stunned me that people were answering a perfectly polite question with derision.  Only the hardcore gamer that intrinsically figures out control schemes and masters them should be playing a game.  Damn you sub-human scum for wanting to play a game casually, and on top of that, the whole game should be made even harder because that is the only way to ever satisfy the deep, gaping whole in the lives of those elite gamers that can brook no dabblers in the electronic realm which they prefer to real life.

A comment on the Paizo forums about their upcoming MMO   (that's a whole other blog post there) reminded me of the same attitude.  Immediately upon hearing that the crux of the game would be building settlements in the wilderness and the like similar to the Kingmaker adventure path, someone on the forums decried that the game was going to be a "Care Bear Sandbox" game, because obviously the only online experience worth having is one where you can not help your fellow gamer  (unless it's your guild members that have already undergone your strict indoctrination program) but rather, where you crush your fellow players, letting them know how much better you are within the digital world. 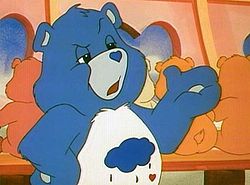 I know, the larger the forum, the more likely you are to get jerks on a forum, and the louder and more obnoxious the jerks, the less likely the sane and reasonable are to post, because they will get attacked like the thread originator on the SOE boards.  But, wow, have we sunk so low as a species that even polite questions must be seen as an chance to "win" online.  Maybe we need PvP forums, so we know that if we post we'll get attacked no matter what we inquire about?

All of this again leads me back to thinking, at least in the tabletop realm, of the age old question of how to garner more people into the hobby.  Perhaps the first step is to not be a clannish misanthropic jerk that has to win conversations.
Posted by Jared Rascher at 12:29 AM 2 comments: