I like to know when people don't like things.  No, really, I do.  I like it when people post their opinions about various things online.  I like to discuss those things.  Discussion is fun.  I'm a geek, and I don't run into a lot of people on a day to day basis that "get" some of the things that nag at the back of my brain.  Online, when I run into people that are geeks of the same persuasion, I like to be able to discuss where we align and where we don't.

On the other hand, I'm not a fan of hyperbole.  I try to avoid it myself.  I know I fail at times, and I apologize.  I hope people call me on it when I fall into that trap.  Hyperbole robs a discussion of any texture.  When someone makes a blanket statement on the ultimate nature of the merits of a given thing, in broad strokes, there is no discussion.  Either you agree, or you disagree, and without knowing what was "wrong" with the work to begin with, it's hard to know where you have common ground. 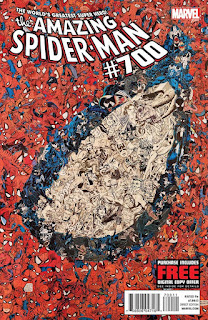 I liked Amazing Spider-Man #700.  It's was a fun read for me that did what an anniversary issue should do, in that it examined exactly what makes Spidey tick and did a bit of a tour of his overall history.  It also went off in a new direction that I think will be interesting, if not as permanent as some of the Marvel marketing indicates.

I can understand that people that just want to read Peter Parker as Spider-Man would not be happy with the development, especially since they can't even get an alternate Spidey fix by reading Ultimate Comics Spider-Man these days.  I also understand that anyone that just picks up this issue, and hasn't read any of Slott's run on the character, might not realize that this is the culmination of a lot of work and foreshadowing, and not just a one shot shocker to sell comics.

I don't even blame people that didn't enjoy it as much because the depth of the set up might involve a lot more reading than just this issue.  I'm cool with all of that.

But I think it's hard to say that Spider-Man #700 is the "worst thing ever."  I'm reading a lot of that.  Lots of discussions about how it's a cheap publicity stunt, and that it came out of nowhere.  I just don't think you can support those statements.

But the buzz about ASM 700 got me to thinking about other controversial moves, what I think about them, why, and how that matches up with what looks like the comics "zeitgeist" I'm seeing online.  The obvious comparison, where I might agree with that zeitgeist is Avengers Arena.  Why do I agree with public opinion on that book, but not this one, and why? 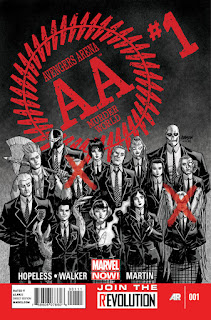 Avengers Arena has been accused of coming out of nowhere and being a "shock" concept to drum up interest in the book.  I agree with that assessment.  I have also read that Dennis Hopeless is actually writing an interesting character driven narrative for the book, and I don't doubt that.  I am not, however, interested in the book because I think the characters in that book deserved better than this book.

But isn't that what is being said of Superior Spider-Man?  Yes, it is.  But wait, I'll explain.  Throughout Avengers Academy, there has never been a hint that all of these characters might be whisked off to some hidden island.  There has never been foreshadowing of Arcade playing a part in the future of the team.  The creative team is completely different.  The ending of Avengers Academy didn't really set this up in any way.

It's clear that this is someone at Marvel deciding that the Hunger Games is a great money maker, and Dennis Hopeless is apparently doing his best to make it an interesting and engaging story.

Slott's narrative in Amazing Spider-Man has foreshadowed Peter being forced to take a life, Doctor Octopus wishing he could make a difference, potentially even being a hero and being well remembered for the good he did, and has actually, for years, had Madam Web seeing a big thing on the horizon regarding Pete's future and something potentially going very wrong.  On top of all of that, the crux of what finally happened in the last few issues ties back to ASM 600, which set up Doc Ock's status quo for years and also hinted at Otto's desire to be better than what he ended up being.

In other words, something was going to happen, all the pieces were there.  If you don't like the configuration, I get it, but the components were all in place for quite a while. 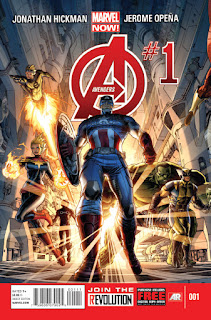 So what other opinion do I hold that doesn't seem to be aligned with the comics zeitgeist?  I'm not a fan of Jonathan Hickman's Avengers title.  But I'm not in hyperbole mode in viewing it.  Hickman is a good writer.  His strengths seem to be deep, complex, far ranging, out there narratives.  Conspiracies that have to do with the meaning of life, connect to aliens that pre-date the universe, and date back 10,000 years, with ties to a whole bunch of other mysteries across time . . . that's right up his alley.

It meshed well with the Fantastic Four.  Deep, long term, cosmic weirdness and unraveling secrets is their "thing."  It didn't work for me with SHIELD  (IMO, a spy organization that should have stayed a spy organization, and not some ancient brotherhood of deep thinkers eternally fighting an equally eternal Hydra organization), and it doesn't work for me on the Avengers.  The Avengers are Earth's Mightiest Heroes, and sometimes that means fighting the cosmic, but not all of the time.

Hickman's concept seems to both step on the toes of the soon to be relaunched Guardians of the Galaxy, and try to recast things that have happened in the Avengers in the past as brand new developments.  The Avengers have faced cosmic threats before.  They have had cosmic powered members before.  They have had large memberships before.  None of that is new, and trying to spin all of that as a bold new direction doesn't work for me.  The added emphasis of trying to deal with a deep, ancient, cosmic threat just takes away from what tends to be a much more Avengers . . . and Marvel . . . strength, and that is:  how does this team of Avengers work together?  How do they interact, and what are the ups and downs of those relationships?

Hickman had a built in fallback for the FF, given that they are family.  Distancing the Avengers from interpersonal relationships  (other than making Steve and Tony the "masterminds" behind the engineering of the group) doesn't play well with my concept of the team.

I've got no beef with Hickman, and think he is a great writer whose style works for me sometimes, and doesn't at other times.  No hyperbole needed.  I just wish others could give writers like Dan Slott that same benefit of the doubt.
Posted by Jared Rascher at 7:16 PM