I'm Not Afraid--Fear Checks in Edge of the Empire

Given the four day weekend I've got going on, last night I started something that I have wanted to do for a while.  My idea was to watch all six of the Star Wars movies, taking notes just on the general "Star Wars" things in the movie, as well as the fringe/edge material, but not particularly noting anything that had to do with large scale armies, galactic politics, or the Jedi/Sith aspects of the setting.

While doing this, however, something occurred to me.

Edge of the Empire introduces a fear check into the game, which is presented as "the players see this scary thing, and if they don't make their check, they take stress or end up with setback dice."  Because Star Wars is a very bright, colorful, grandly heroic setting, these don't seem to come up very often.  Heck, the examples use Vader a lot.

Unfortunately, it's really easy to fall into the idea that fear checks should come up with PCs run into Vader or when you have a side tangent about zombies or Rakgouls, or some other horror element that isn't usually present in Star Wars, and maybe again when you Jedi characters go through some kind of trial like the cave on Dagobah, but other than that, it's not a mechanic that comes up much.

But what I noticed watching Episode I  (keep in mind, this is a structural analysis, not content--not too worried about the quality of the story so much as the structure) is that there are several scenes that seem to call out for Fear checks, but using the term "fear" colors the use of the check.

In fact, there seem to be many situations where "fear" checks would be appropriate, but should probably be called something more like "intimidation" checks.

Some examples that came up while watching the movie: 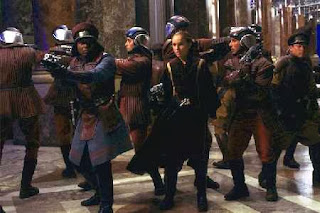 The point is, while these are all situations where a fear check would be perfectly logical, they don't all follow the pattern of "look, there is a thing that is very scary and I have just realized it is here."  Some of them hinge on past performance.  Some of them hinge on "not only is this dangerous, but if we fail there will be long term massive repercussions."

Email ThisBlogThis!Share to TwitterShare to FacebookShare to Pinterest
Labels: Star Wars Edge of the Empire