So Much To Like, But I Can't Get Past the Wards (Dresden Files RPG)

I really like the Dresden Files novels.  I worked my rear end off getting more or less caught up with the series once I started reading them, because some friends recommended them and I was so happy when I started reading them.  Since I'm a gamer, this led me to the RPG, which I picked up, which becomes a more interesting story.

I had a very hard time picking up the Fate rules from the Dresden Files RPG books.  I really like them, and they are very pretty, and great sourcebooks for the material. I love the sidebars written in the voice of the characters.  But to actually learn the base mechanics, there just seemed to be too much digression and odd ordering of presentation of the rules, so that I didn't really get a handle on what was going on until I got my preview copy of Fate Core.

Once I understood the system,  not only did I love the sourcebook material, and the additional in setting fiction, but I really liked the tools to create a lot of "urban fantasy" tropes, like werewolves and half-vampires and fey knights.

But the part I'm still not thrilled with, and the part that makes me hesitant to run the game, is magic.  Especially magic as practiced by the White Council wizards.

It's not that I don't understand how the rules work, but I guess you could say my problems fall into two camps with the rules as written. 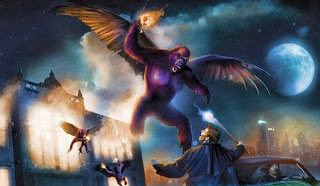 1.  While I've not run, or played Fate yet, from most of what I have seen, its a system that greatly benefits from maintaining the flow of the session.  Most of the rules can be remembered without ever cracking a book.  Sure, you may not remember how many refresh a given stunt costs, or how many sessions before you can raise a skill, or how many skills you bump up at a milestone, but that is all stuff you can look up between sessions.

While I'm sure that you eventually get used to the multiple skills, how backlash works, rotes, and how focus items fit into the entire situation, there is going to be a lot of page flipping going on at first if someone wants to play someone like Harry in your game.

2.  Beyond the complexity by itself, it just feels like a lot of the way magic works is counter intuitive to how things work in Fate to begin with.

Want to show backlash for a spell that someone manages to cast that is still beyond their ability to fully control?  That sounds like Succeeding with a Major or Minor Cost or a Compel at just the right moment.

How many focus items do I have, and what do they effect?  Why not break down focus items as their own stunts so that the rules are buried in the same rules for spellcasting and the like.  While lots of wizards do seem to have focus items, it doesn't seem like it's mandatory, so I'm not sure why it's part of the package, and separating the rules into their own stunt would seem more logical.

Magic items?  Again, if something like the Swords of the Cross or the Warden's Swords are stunts, why aren't magic items that a character makes on their own?  It's Fate, so is it really that important to delineate between an item you inherited or found or one that you made, in the rules?

Consumable magic items . . . couldn't most of those be modeled with Create an Advantage?  Possibly with stunts that specifically pertain to getting bonuses from items in very specific instances when you make a potion that does X or Y?

When I started going back and forth between Fate Core and the Dresden Files book to get a handle on the rules, there were so many times when I ran across the baseline way that Fate does something and then thought that would probably be how the Dresden Files RPG handled a given "thing," only to find out that the book had a whole other, much more complicated way of doing something that the rules already covered really well.

In a perfect world, it would be great to have the Dresden Files RPG out as a supplement to the Fate Core book, without all of the mechanics detailed, and the only rules content being stats and stunts specific to the setting.  I think the all-in-one method made rules presentation more confusing, and the fact that it was it's own RPG based on Fate, instead of being a supplement to the core rules  (which I realize didn't exist when the game came out) just encouraged proprietary sub-systems that didn't need to exist.

As it stands, I have lots of ideas about running a game in the Dresden universe.  I really like the city building information in the book, and most of the stunts are a great set of tools for Urban Fantasy of many different stripes, not just Dresden.  The book is great at making me want to play in this universe.  I just don't know if I want to use magic as it appears in the book, and I don't know that I want to spend the time making up my own list of stunts and suggestions for existing game rules.

I certainly don't regret buying the game, but I'm not sure I would want to run it as is, or would want to invest the time in modifying the system to work the way it should in my brain. 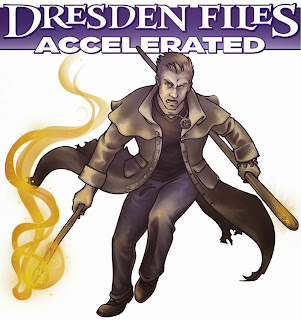 All of that having been said, I'm eagerly awaiting the Dresden Files Fate Accelerated Edition, even if it's going to be quite a bit down the road before it comes out.  I'm hoping there will be a lot more suggestions on how to flavor FAE to fit Dresden and less bolting on of complex subsystems.

Disclaimer:  The subsystems may work just fine.  I haven't played the game, and they may work great.  But as presented, I'm just not that excited about trying them to find out, and I've got a lot of other games on my plate that keep me from wanting to give something I'm not excited about a spin.
Posted by Jared Rascher at 4:46 PM No comments:

While it hasn't come up yet, I was contemplating what I would do to break the deadlock if all of the Destiny Points at the table went all Light or all Dark.  While the core rules mention that the GM can intervene if he thinks the players are intentionally "locking up" the Destiny points, I wanted a more fun, more even handed solution that would be in place right from the start. 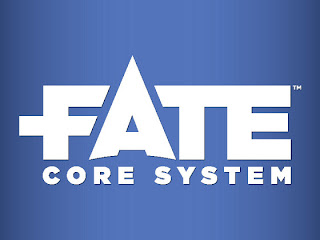 Then it occurred to me that there is a really neat solution from Fate that could be implemented.  Compelling Destiny!

If the Destiny points are all Dark or all Light, the players or the GM may Compel their Destiny.  It works like this:

If the Destiny Pool is completely given over to the Dark Side, one of the players may propose something bad that will happen to their character as Destiny has it's way with them.  While the GM has to agree to whatever might happen, it's up to the player to come up with what bad thing might happen to their character.  It might mean upgrading the difficulty of a check, or having a particularly bad consequence befall the character that they can't immediately mitigate.

Once this consequence is agreed upon, the player gets to flip one of the Destiny points from Dark to Light.

If all of the Destiny points are Light side, the GM may come up with a particularly bad thing that will befall one of the NPCs, or may even give the players a boon that they were not expecting and not working towards.  So long as none of the players object to the proposal by the GM, the GM flips one of the Light side points over to the Dark side.

Posted by Jared Rascher at 9:27 PM No comments: