So, just to play around with Excel to keep on top of things, I made up a list of games that I would like to play or run, and ranked them, and came up with a list that kind of looked like this: 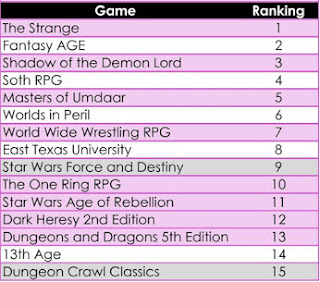 It's not in order of my favorite games, it's more a matter of what priority I currently have for every game that I currently want to run or play.

Dungeon Crawl Classics:  Yeah, it's at the bottom of the list, but that doesn't mean I don't love the gonzo game, or wouldn't want to get back to it.  I had fun running it, and while my group playing it was good, I'm not sure everyone was 100% on board with the tone and setting, so I'd love to give it another go with people really enthusiastic about it's weirder aspects.

13th Age:  It's lower on the list because I played it quite a bit, as a player, but I am still interested in giving it a go as a GM.  I really want to try out the "10 sessions/10 levels" campaign structure they mention in the GM section sometime.

Dark Heresy 2nd Edition:  I only got to run two session of this game before time crunched me a bit.  Still have a lot of ideas for the setting, but the crunchiness of the rules  (even though I like them) and the mystery/conspiracy aspect of the campaign mean that I want to put my all into this if I do it again, and I feel like waiting until the stars are right.

The One Ring:  I am really intrigued by this game, but even though I've never played or ran it  (which tends to push things higher on the list), I'm kind of intimidated by the game, because it does such an interesting job evoking the setting with the rules, I'm afraid I'd muck it up by making it too much of a standard fantasy campaign.

Force and Destiny:  I have played in a Force and Destiny game, but I still want a chance to run one, and I'm really interested in a game where all of the Force users have no connection to the Jedi, but maybe have some other connections to other Force traditions that may be getting them hunted by the Inquisition.

East Texas University:  Totally +Ryan Porter 's fault that this is on the list.  I really like Monster of the Week for my Urban Fantasy/Monster Hunter RPG of choice, but this one has a very unique feel and a specific niche carved out that I think would be fun to explore.  Also, a little more interested in playing this one than running it.  Maybe I'm just still a bit Savage Worlds gunshy after the infamous Hellfrost implosion of a few years ago.

World Wide Wresting:  Really want to run this.  I've got ideas for a local promotion trying to make it big.  I just want people that are really interested in the topic  (even if they don't watch wrestling currently) before I give it a whirl.  New ideas seem to work best if everybody is enthusiastic about them from the get go.

Worlds in Peril:  I enjoyed my DC Adventures game, and I've enjoyed running various Marvel Heroic events.  For some reason, supers is one genre that I really enjoy exploring from multiple angles, and now that I've done some Powered by the Apocalypse gaming with Monster of the Week, I'd love to try this one out sometime.

Masters of Umdaar:  I want to get some Fate gaming in, but a lot of the genres where there is an interesting Fate supplement (to me), I've got the genre covered with something else.  On the other hand, running a Masters of the Universe style 80s cartoon campaign?  It's young, but it shot up the list quickly.

Soth:  I've got everything to play this printed out.  I think it will be a lot of fun.  I just want to make sure I have a good number of cultists available and enough time to be able to explore a fun story with the rules.

Shadow of the Demon Lord:  Just recently got the PDF, and I backed this at a level where I have a crazy amount of stuff coming in the future.  My read through makes this feel like the kind of grim toned fantasy adventuring I was kind of wanting with DCC, but that the more gonzo aspects of that system kind of played more for comedy.  I have said elsewhere that the game evokes some interesting thoughts in me, because mechanically it feels like D&D and Warhammer Fantasy RPG 2nd had a mutant baby, but tonally it feels kind of like 13th Age, in that it's meant to have epic stakes, but your characters intentionally don't quite feel like they may but up to the challenge.  Want to kick the tires to see if my assumptions hold true at the table.

Fantasy AGE:  The system seems really fun, and I'm torn between wanting to run a Midgard campaign using the rules, possibly using Green Ronin's Freeport setting, or possibly just going crazy and making up a setting for it.  In any event, it feels like it would be a significant time investment to start up a game, so I would want to make sure I was happy with all of the stuff I had lined up for the game.


Now just because this is the list right now, that doesn't mean my gamer ADD won't kick in and add or rearrange something when I hear some intriguing buzz in the future about something else.  Also, games I'm running or playing in currently aren't on the list, and if something uses the same system and I'm favoring one over the other, only one got on the list.  Except Star Wars.  Star Wars is always an exception.
Posted by Jared Rascher at 10:56 AM 3 comments: