I'm back home from visiting relatives for the holidays, and all of that time away from my keyboard let me do so deep, game related soul searching, and I think I've come up with my gaming wishes for 2018.

In case you didn't read my gaming wishes for last year, I'm not phrasing these as "resolutions," because I'm not sure it just takes "resolve" to make these things happen. Sometimes it takes opportunity + creativity to make them happen. Plus, I'm just obstinant enough to want to call it something other than a resolution.

Wrap Up My Ongoing Campaigns With Intentional Endings

So, this one is going to be all or nothing, but since I started all of my current ongoing games as limited run games, running about 9-12 sessions each, I want to make sure that all of those campaigns wrap up with a completed story arc (even if there are some open questions left at the end).

In general, I've been running most of my games as "seasons" in recent years, and I've been doing a better job of actually having an ending for my games, so I want to keep that streak going. But I'm only counting this one as "complete" if I bring all of my current games to a close in this manner. Currently, that includes:

Gaming in the Wild

This one is a weird one. Way back in the golden age of my gaming, back in high school, I actually ran quite a few games outdoors, in the tiki hut bar out by the pool that we had in the backyard. Because of that, from time to time I've run a few games outside, but not for a very long time.

So sometime in 2018, I'd love to get the chance to run a one-shot, or maybe a few warm-weather holiday games, outdoors, at some kind of park location. I'm calling this one right now--I'm thinking this is one of the trickier ones to pull off.

Get Back in Front of the Camera

I had a lot of fun running my Shadow of the Demon Lord game, and I got a chance to play with some great new friends. I don't know what I want to run for this, but I'd like to run another online game at some point in the future. I still haven't gotten over my inability to adapt to virtual tabletops so this will be increasingly out of touch with the overall gaming community, but hey, I'm doing it for the fun. 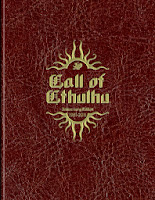 Run a Call of Cthulhu Game

Despite poking around the gaming world since 1985, I've only played Call of Cthulhu at conventions, and I've never run the game. I want to rectify this. Some random chatting with my wife about the Waltons while driving through the mountains the last few days actually jumpstarted some thoughts on what I would do for this game.

So at some point in 2018, I'd like to attempt to actually run Call of Cthulhu, and get some use out of my 7th edition PDFs. 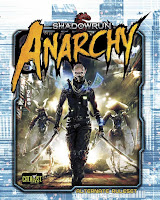 I've liked the Shadowrun world for a long time. I've always been intimidated by the prospect of running a Shadowrun game. The rules are a little daunting to me, and I've heard tons of stories about how to run Shadowrun the "right" way.

Despite being daunted by all of that, I've gotten to interact with Shadowrun via video games, and when Shadowrun Anarchy came out, it felt like it was written just so I could finally run the game.

So, it may only be a one-shot, or it may be a longer arc, but at some point in 2018, I want to use the Shadowrun Anarchy rules to actually run a game in this setting that I've been hovering around for a while.

Play With Some Sharp Things In Shadowy Places

I did reviews for Blades in the Dark and 7th Sea back to back, and which game I ended up running was kind of a toss-up. In the end, I went with 7th Sea, because it was easier to immerse myself in the media that informed the genre.

I'm not sure if I want to run the game or play it, but I wanted to have some kind of engagement with Blades in the Dark to sink my teeth into it a bit more than I have been able to.

Cross the Remnants of the Rainbow Bridge

Early next year I should be getting my new edition of the Midgard Campaign Setting, as well as the new book containing 5th edition material. Given that I like Midgard as a setting, and I like 5th edition D&D as a game, I need to get both of those together in order to run a campaign in the setting.

Its been a few years since I ran Dungeon Crawl Classics, and in the interim, I think I have a better idea of how to use the game without trying to make it do what it wasn't intended to do. In addition to this perspective, I've backed a few DCC Kickstarters, including the scratch-off 0-level character sheets and the DCC Lankhmar boxed set.

While I definitely want to run a funnel again, because those have been consistently fun, I want to have a chance to experience a few higher level adventures with the game as well. I'm also really interested to play with the Lankhmar modifications to the rules, such as the three class structure and the Fleeting Luck mechanic.

I'm running quite a few Apocalypse World inspired games at my local convention at the end of January, as I have for the last few years. So I'm not going to broadly say "I need to run PBTA games," and then pat myself on the back for doing something I already know I'm going to do.

What I want to do, then, is run a PBTA game, outside of my regular convention, that is not one of the games that I've run on a regular basis on the back. That means, much as I love them, I'm not counting:

Take A Cue From Back to the Future III

I have never run or played a game in the American Old West. My personal preference is probably for a slightly more steampunk-ish or weird west vibe, but any kind of western gaming would count for this. I've just never, ever done this in the past, and I should probably rectify this at some point in time.

I now have PDFs for Trail of Cthulhu, Night's Black Agents, and Timewatch. I'm taking this as a hint that I need to finish reading the rules for at least one of them, and I need to run and/or play in some kind of Gumshoe based game in the future.

In addition to my local convention of Winter War, my goal this year is to hit both Gary Con and Gamehole Con this year. I'm not sure if those two will always be my "goal" conventions, but I definitely want to experience them this year and see what they are like.