What Do I Know About Reviews? Fey Gifts and Bargains (Dungeon Masters Guild Product) 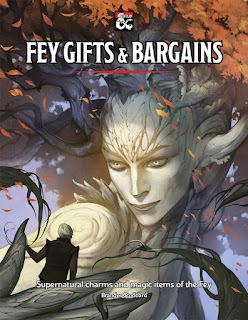 For whatever reason, Dungeons and Dragons hasn’t quite spent as much time developing the hierarchy and politics of the fey courts as it has spent exploring the politics of the Nine Hells, the interaction between the layers of the Abyss, or even the mercenary tendencies of Gehenna. There have been products here and there, but not with the level of detail that the lower planes receive.

This might be because demons and devils, despite the amount of time that spent on their politics in the game, can still be counted on to be villains consistently. The fey, on the other hand, can be . . . complex. The fey can literally turn into antagonists without directly trying, just by being true to their nature.

Why do I immediately think to compare fiends and the fey? Because they share some common tropes, like convoluted political maneuvers and bargaining with mortals. As a slight digression, Shadow of the Demon Lord makes this superficial resemblance a more explicit connection, but that’s not what we’re here to look at today.

Before I dive into today’s review, a slight disclaimer. I’m a patron of Brandes’ Patreon, so I get to see a lot of his work as it comes together. He’s got a lot of great ideas, and it’s well worth following his account. Today, we’re looking at the Dungeon Masters Guild product Fey Gifts and Bargains.

The Form of the Pact

The product is a ten-page PDF, with a full-color cover, and a single page index with the standard legal information for a DMs Guild product. There is colorful half and quarter page artwork in the product, and the formatting looks very similar to standard 5e formatting, with red headers, separate sidebars for call-out information, and the standard light parchment background.

The product gives a brief introduction to fey bargains, and then explains the overall hierarchy of the fey courts, with example creatures at each level. It then moves into a section looking at what the fey ask for in their bargains, and what they offer in exchange. There are example fey charms, example fey NPCs to show what different fey may ask and offer. The product concludes with several fey themed magic items.

The fey hierarchies are divided into the following levels:

One of the things I appreciate about 5e is that the game has become less focused on creature type as the final determining factor on where creatures may be allied, and a sidebar explains how firbolgs and fomorians can be included in the typical fey power structures.

The levels are important for the next section, which details what fey ask for, and what they provide in exchange for what the mortal is willing to give. It makes sense that a fey commoner might abide by their deals, but can’t promise the magical wonders available to a Knight, or especially an Archfey.

While not explicit in the text, the feeling is that making bargains is natural to the fey because giving and receiving based on agreement is the trade by which fey society works. For magical creatures with a very different view on the universe, secrets and service is often going to be much more desirable than gold or gems.

Bullet points under each “rank” of fey give examples of how much value an item offered by the fey might have, what rarity of magic items might be offered, or how much service the fey is willing to agree upon. More powerful fey often offer the service of their vassals, and the Lords and Archfey may offer secrets, tasks only they can do, or fey charms (supernatural gifts signified with a physical manifestation).

The fey don’t trade this for just anything a mortal can offer, so they are examples of what memories or services a mortal might offer to obtain the items that the fey bargain with. Unlike fiends, the fey aren’t usually too interested in souls, although they may take one in a pinch.

There are example physical objects that serve as the manifestation of a contract, as well as examples of what happens when mortals or the fey break their end of a contract. Also included are supernatural gifts, not unlike the Charms detailed in the Dungeon Master’s Guide’s chapter on treasure.

There are fourteen new fey charms in this product, taking out almost a whole page. They have varying effects, and the number of uses, or the amount of time that the charm functions are flavored to fit in with the fey mindset. For example, they may work a set number of times, total. They may operate until the death of the giver, or they may last until the change of the season.

These range from charms that push back aging, allow you to avoid attacks, summon items, or gain resistance to elemental damage, among other effects.

In addition to giving examples of what the trade between fey and mortals may look like, and what the mechanical effects of those bargains may be in the game, the product also provides four example fey that can be bargained with. These are from various ranks within the fey courts, and each of them has traits, ideals, bonds, and flaws, as well as sections listing what they want, and what they are likely to offer.

I’ve said this in at least one other review, but as much as I wish they worked better as triggers for PCs, I love getting traits, ideals, bonds, and flaws for NPCs, because they give a lot more benchmarks for roleplaying the NPC. It’s even more important for NPCs that are negotiating for something they want.

There are 10 new fey magic items included in this product as well, including spears, axes, invitations, teeth, swords, falconry tools, necklaces, arrows, and bows. The themes of these magic items include dreams, cannibalism, heat and cold, strengthened life force, and stealth.

I love the little details of these items (like the implied use for recycled teeth, or the alignment of items to a fey court). I’m never going to complain about getting more magical spears in the game.

This delivers on what I wanted from it. There are some clear examples of what the fey want, and it reinforces a dreamy, ephemeral understanding of what can be traded. The gifts feel appropriate for the themes of the fey, and I appreciate that the fey charms call back to the existing examples in the Dungeon Master’s Guide, and that we also get some magic items that the fey may offer for trade within the parameters of the example lists. I especially love getting some example NPCs to show what an individual fey may be looking for, and how they might go about bargaining.

There isn’t much that I can complain about this product. It is very specifically focused on fey bargains, and it delivers on this theme. That may be too narrow a theme for some, although it’s a pretty focused delivery. The only other thing I may have wanted was just a few more examples of fey bargainers, especially since we get a commoner and an exile as examples, who have the same relative bargaining power, but we don’t see a knight or an archfey (the latter just being me wanting more archfey, which is probably way beyond the scope of this product on its face).

I’m really happy with this product. I wish I had access to it before I started running my Tales of the Old Margreve campaign, since I used charms to signify pacts between various fey lords and the PCs. Since I’ve got another player joining near the end of the campaign, at least I’ve got some new options to look at when Reynard The Fox Lord enters the picture.
Posted by Jared Rascher at 4:28 PM

Email ThisBlogThis!Share to TwitterShare to FacebookShare to Pinterest
Labels: Dungeon Masters Guild, Dungeons and Dragons 5th Edition Reviews, What Do I Know About Reviews